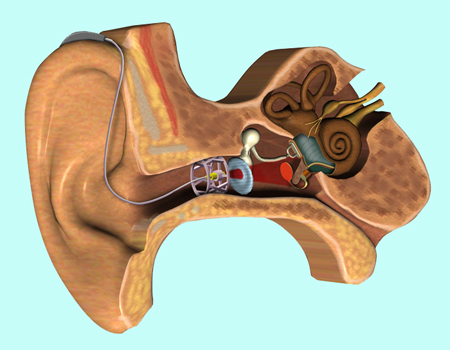 For the many people who suffer from impaired hearing – and one recent estimate says that almost one in every two people over the age of 65 in Europe have poor hearing – conventional hearing aids are no longer effective enough.

A new optically-based device, developed in Germany, is expected to significantly improve patients’ hearing and be able to be implanted during straightforward outpatient surgery.

In recent years, cochlear implants, which amplify sound more effectively than conventional systems, have demonstrated greater success than conventional hearing aids. However these middle ear implants require complex operations that last several hours. The relatively high risk and expense of the surgery mean that it is rarely performed.

Researchers from the Fraunhofer Institute for Manufacturing Engineering and Automation IPA in Stuttgart say they could soon offer more hopeful prospects to patients with reduced hearing, thanks to their work on an innovative hearing aid that is significantly easier to implant, which makes it affordable for large numbers of people.

The new solution comprises three parts: a case with a microphone and battery; wireless, optical signal and energy transmission between the outer and middle ear; and an electro-acoustic transducer – the centerpiece and loudspeaker of the implant. The Stuttgart team is developing the electro-acoustic transducer, which will be round in shape and measures approximately 1.2 mm across. 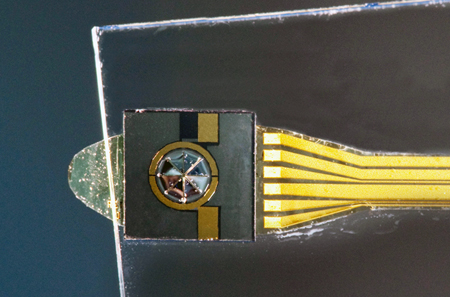 Quality and simplicityThe IPA’s partners in the project, which is sponsored by Germany’s Federal Ministry of Education & Research, are the University Department of Otolaryngology, Head and Neck Surgery Tübingen, the Natural and Medical Sciences Institute (NMI) at the University of Tübingen, and the hearing aid specialist Auric Hörsysteme GmbH.

“Our goal is to take the better sound quality of implantable hearing aids and combine it with a much simplified operation,” says Dominik Kaltenbacher, engineer at IPA. “To implant our system, all surgeons have to do is make a small incision at the side of the eardrum and then fold it forward. This can be done in outpatient surgery.”

The electro-acoustic transducer, which takes the form of a piezoelectric micro-actuator, is then placed directly at the connection between the middle and inner ear known as the “round window”. From there it transmits acoustic signals to the inner ear in the form of amplified mechanical vibrations, thereby enhancing the hearing capacity of patients. “The electro-acoustic transducer works on the same principle as bending actuators,” explains Kaltenbacher.

“The bending elements, which are arranged in the shape of a pie, consist of a laminated composite made from piezo-ceramics and silicon. If voltage is applied, the elements bend upwards and generate a mechanical vibration. This spreads to the membrane of the round window and the inner ear, stimulating the auditory nerve.”

The effect: although the round window implant is no larger than a pinhead, it can output volumes of up to 120 dB, which is roughly the noise a jackhammer makes. “This high performance is necessary for very good speech comprehension, particularly for high-pitched sounds, which people who are severely hard of hearing find especially difficult to pick up,” says the IPA researcher.

Kaltenbacher adds, “The individual components of the hearing aid have all been developed. The next step is to optimize and assemble them. The implant material needs to be encased so the body will tolerate it and it must remain stable over long periods – such hearing aid implants should last at least ten years. The optimized individual components should be ready by June of this year; and human testing of the overall system is planned for 2014."