US Navy to deploy laser weapon ahead of schedule

Following years of development, a high-power solid-state laser is set to sail aboard the USS Ponce next year. 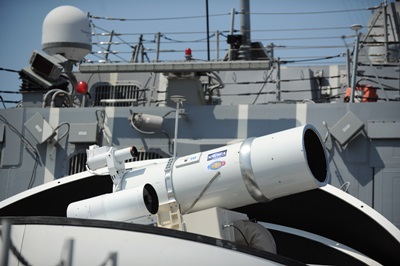 The US Navy says that it will deploy a high-power solid-state laser on board one of its ships next year, in the clearest evidence yet that so-called “directed energy” weapons are regarded as militarily useful.

The move follows recent US Navy demonstration of a fiber laser system capable of destroying an unmanned aerial vehicle (UAV) - a YouTube video (below) showing the system's capability had already generated nearly a million views within hours of appearing - as well as similar efforts in Europe.

A statement from the Navy quoted the chief of naval research, Rear Admiral Matthew Klunder, as saying: "Our directed energy initiatives, and specifically the solid-state laser, are among our highest priority science and technology programs. The solid-state laser program is central to our commitment to quickly deliver advanced capabilities to forward-deployed forces."

Such weapons, which would effectively use a power supply in place of bullets and missiles, have long been desired by armed forces, and the US Navy is now set to install such a weapon on board the USS Ponce transport craft in 2014, two years ahead of schedule.

Recent developments in Europe have included a 50 kW system based on fiber lasers developed by Rheinmetall, and a 40 kW system from MBDA Germany that was able to shoot down towed artillery from a distance of 2 km. In the US, a 10 kW system built by Lockheed Martin recently shot down small-caliber rockets, but for true military utility, an output of more than 100 kW is usually stated as the benchmark power requirement.

Speaking at last year's SPIE Europe Security + Defence symposium in Edinburgh Mark Neice, director of the Albuquerque-based High-Energy Laser Joint Technology Office, had hinted at the advances being made, saying that "within the next couple of years we will demonstrate significant military utility of this laser weapons capability".

Cost/benefit analysis
Klunder highlighted that the use of a laser in place of traditional “kinetic” weapons could have economic benefits as well as tactical ones, saying: "This capability provides a tremendously affordable answer to the costly problem of defending against asymmetric threats, and that kind of innovative approach is crucial in a fiscally constrained environment."

“Our conservative data tells us a shot of directed energy costs under $1," Klunder told the Sea-Air-Space exposition. "Compare that to the hundreds of thousands of dollars it costs to fire a missile, and you can begin to see the merits of this capability."

According to the US Navy, the decision to deploy the laser onboard USS Ponce ahead of schedule is the result of rapid progress in its research efforts.

It is involved in a variety of such projects, including the Maritime Laser Demonstrator that is under development with prime contractor Northrop Grumman, while the US Army has also funded several similar programs. Last September, the US Navy issued a broad area announcement for proposals to develop a laser weapon with a view to deploying the technology in 2016.

Future “is here”
Although the US Navy’s latest announcement is light on technical details, it says that the Office of Naval Research (ONR) and Naval Sea Systems Command recently performed demonstrations against remotely piloted aircraft.

By using technology investments made through other Department of Defense (DoD) agencies, researchers have been able to increase the ruggedness, power and beam quality of lasers, more than doubling the range of the weapons in the process, the US Navy announced.

"The future is here," said Peter A. Morrision, program officer for ONR's Solid-State Laser Technology Maturation Program. "The solid-state laser is a big step forward to revolutionizing modern warfare with directed energy, just as gunpowder did in the era of knives and swords."

Although improvements to high-power laser combining, system efficiency and beam propagation through the atmosphere at large stand-off distances are still required before laser weapons achieve true military utility, the technology is advancing rapidly, and is expected to yield a variety of options not previously enjoyed: from non-lethal disabling and deterrence all the way through to target destruction.

"We expect that in the future, a missile will not be able to simply outmaneuver a highly accurate, high-energy laser beam traveling at the speed of light," Klunder said. Following the USS Ponce demonstration, the Navy says that it and the DoD will continue to research ways to integrate affordable laser weapons into its fleet.