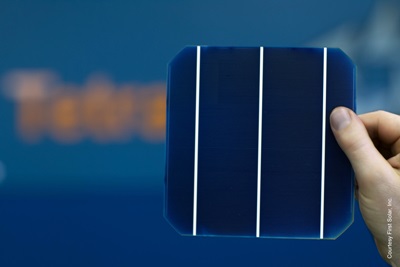 TetraSun's cell: a game-changer for PV?

First Solar, the US-based photovoltaics giant that has until now specialized in cadmium telluride (CdTe) panels, is making a significant strategic move with the planned acquisition of a start-up company working on crystalline silicon technology.

Announcing the deal at the very end of the firm’s analyst day in New York on April 9, First Solar’s CTO Raffi Garabedian said that TetraSun’s technology would yield PV modules with a winning combination of high conversion efficiency and low cost.

“It’s this unique combination that makes it the game-changer,” he told analysts at the event, contrasting what the 14-person start-up had done with other improvements to silicon cell technology that were either “too incremental or too costly”.

Executive pedigree
Founded in 2009, San Jose-based TetraSun may be small but it boasts some impressive executive pedigree. CEO Denis de Ceuster was previously the director of cell research and development at the high-efficiency cell manufacturer SunPower, while COO Doug Crafts is a veteran of JDSU and Intel. Crafts joined the optical communications firm when JDSU acquired Scion Photonics, the start-up that he had co-founded, in 2002.

Along with Fraunhofer ISE’s former head of high-efficiency solar cells Oliver Schultz-Wittmann and Pacific Solar veteran Adrian Turner, that team was able to produce a 20% efficient module within a year of TetraSun’s establishment.

That, according to First Solar’s Garabedian, points to the fact that the technology is very simple. The “secret sauce”, as he referred to it, revolves around a patent-pending approach to surface passivation using unspecified materials. Once in production, he expects the 20% efficient cells to enable a module production cost of just $0.60 per watt.

Targeting Japan
A small number of TetraSun’s modules have already been deployed in Japan, home to early investor JX Nippon Oil & Energy and the obvious first target market for the modules because of the restricted rooftop space in the country.

That enables high-efficiency cells to come to the fore, while the Japanese government has also established some generous financial mechanisms to support the build-out of residential PV in the country as it seeks to meet energy demands while restricting the use of nuclear power following Fukushima.

First Solar is aiming to begin mass production of the bifacial TetraSun cells by the middle of next year, at an initial annual run-rate of around 100 MW. JX Nippon Oil & Energy is already in discussions with First Solar to distribute the technology in Japan.

“JX Nippon Oil & Energy was among the first to recognize the potential of this technology, and we are very pleased to continue working with this leading energy company to bring this product to market,” said the First Solar CEO Jim Hughes. “Japan is an important market with unique energy challenges, and we believe this new technology is well-suited to help them meet their energy needs.”

Simple processing
If the transition to volume production is successful – and Garabedian stressed that the relative simplicity of the TetraSun processes and standard tooling requirements gives him great confidence that this will be achieved – it ought to give First Solar a new line of business in the residential PV sector that is highly complementary to its existing portfolio of utility PV projects.

“It opens up the entire [solar] market to us,” added Hughes, with Garabedian highlighting that the new c-Si technology acquired and the firm’s existing CdTe panels do not compete with each other.

Other critical advantages of the TetraSun approach are the absence of both indium tin oxide and silver in the cell designs – two materials whose high and sometimes volatile pricing have inflated the cost of PV technology. 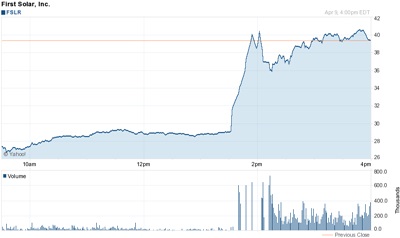 Share price spikes
Earlier on during the analyst day, Hughes had cheered First Solar investors with updated financial guidance for this year and predictions of solid growth in both 2014 and 2015, despite the continuing difficult market conditions in solar.

That, together with news of the TetraSun acquisition – due to be completed in the current quarter – sent First Solar’s stock price soaring more than 35% on April 9. The company also announced that it had set a new record for CdTe module efficiency, with a 16.1% performance benchmark eclipsing its previous best of 14.4%.