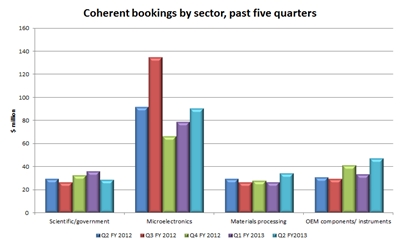 The Californian laser vendor Coherent has reported a sharp sequential increase in bookings in its latest fiscal quarter, reflecting some initial demand for its high-power fiber lasers and early signs of an uptick from the semiconductor equipment sector.

At $200.1 million, sales were up 9.2% sequentially, thanks in part to the recent acquisition of ultrafast laser specialist Lumera Laser, which contributed around $9 million to the total.

Bookings also showed a healthy upturn, growing nearly 15% sequentially to just under $202 million. With the scientific market hit by budget sequestration in the US and seasonal effects elsewhere, the commercial and medical sectors combined to deliver the promising outlook.

“Demand across our commercial markets improved during the quarter,” said CEO John Ambroseo. “Fortunately, our opportunities in the commercial market dwarf the downside risk in the scientific business.”

Coherent said that it received record orders from its medical original equipment manufacturer (OEM) customers in the quarter. At the moment that is largely due to demand for its lasers in refractive and cataract surgical procedures, while the company is actively targeting the growing market for DNA sequencing equipment in anticipation of future demand for optical subsystems based on laser or LED light sources. 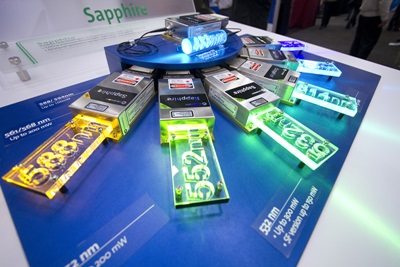 Ambroseo noted growing demand for Coherent’s “Diamond” CO2 lasers used in via hole drilling applications as one example, while the company also received the first order for its “UVBlade” laser lift-off system and for Lumera’s “Rapid” ultrafast lasers used to cut strengthened glass. He estimates that the global market for glass cutting systems lies somewhere between 1000 and 2000 units.

“The outlook for flat-panel display (FPD) is pretty exciting,” the CEO also told investors. “Samsung has upped the ante with the release of the Galaxy S4 smartphone.”

The significance of Samsung’s smart phone and tablet launches is that the Korean company leads the world in the use of active-matrix organic LED (AMOLED) display screens, and greater uptake of this display technology should translate to greater demand for lasers used in their production.

And while the AMOLED television market is only just emerging with a few high-end, expensive models, Ambroseo believes that if the technology does become a mainstream hit, it will lead to “many hundreds of millions of dollars” worth of lasers and optics being used to support their manufacture - assuming that it is largely based on low-temperature polysilicon (LTPS) backplanes.

Fiber laser trials
On the materials processing front, the CEO said that Coherent had received the first volume order for its 1 kilowatt fiber laser, with “many tens of units” destined for shipment to an OEM partner.

Meanwhile a different OEM customer is trialling Coherent’s metal-cutting “Meta” tool equipped with a fiber laser source, and a beta 3 kW fiber laser unit is also set for delivery in the second half of the year.

Ambroseo said that the company’s “Highlight” fiber lasers – an early version of which was first unveiled at the LASER: World of Photonics trade show in Munich nearly two years ago – had been designed with scalability in mind, and to offer a lower dollar-per-watt cost as the power output increases. He is aiming to scale the series from 1 kilowatt to 6 kilowatts within a similar form-factor.

“We are also working to reduce our diode costs through power scaling of the individual emitters,” he concluded. “Our goal over the next 24 months is to double the emitter power and halve the number of diodes required.”

Coherent expects to post another increase in sales, to between $200 million and $212 million, in the current quarter. Net income for the latest reported quarter came in at $15 million, slightly up on a sequential basis.

• Investors reacted positively to Coherent's results and outlook, with the company's stock price jumping 15% in early trading on April 25 and hitting $60 at one point. Aside from a brief period two years ago, the stock has not traded at that level since the communications boom back in 2000.