Different approaches by Second Sight and Retina Implant show the progress made in combating the condition. 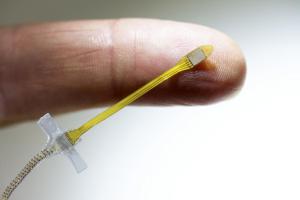 For sufferers, the consequences of the condition can be drastic: cells in the retina fail to function properly, often starting with peripheral rod cells and progressing to the central cone cells, and progressive sight loss results.

Although the condition is at present incurable, advances in the field of retinal implants demonstrate the progress now being made in combating the condition and restoring a measure of sight to those afflicted.

In February 2013 Retina Implant, based in Germany, announced results from the first stage of a multi-center clinical study into the use of its subretinal implants as a treatment for RP. The study was published in in the journal Proceedings of The Royal Society B.

The trial found that during the course of a three to nine month observation period, functional vision was restored in the majority of nine German patients implanted with the company's Alpha IMS microchip. This represented part of the first module of the Company’s second human clinical trial.

Visual acuity for two of the patients surpassed the visual resolution of patients from the company’s first human clinical trial, according to the company.

"Alpha IMS is a subretinal implant, placed below the retina in the macular region," Walter-G. Wrobel, CEO of Retina Implant, told optics.org. "This approach leverages the natural movement of the eye to capture and interpret images, unlike other approaches to retinal implant technology which use an externally-worn camera to process images."

The implant is positioned at the level of the photoreceptor cells in the retina, from where it can directly stimulate other retinal cells and make full use of those inner and middle retinal layers that remain correctly functioning.

In use, light-sensitive diodes in the 3 mm x 3 mm x 70 um microchip respond to incoming light and pass a current into the underlying retinal cells. Wrobel commented that "our device has 1,500 electrodes, which is the largest number of any other implant currently in clinical trial."

At present the Alpha IMS implant is intended only for the treatment of RP, although Retina Implant has indicated that it may eventually be tested against other conditions, such as macular degeneration.

"While we believe there is potential in the future for other degenerative eye conditions, we are currently focused only on RP and on bringing this technology to market for patients with late-stage RP who could benefit from it," confirmed Wrobel. "Ours is the first and only subretinal implant in clinical trials, and performance and usability set new standards for retinal prostheses. Recognition of daily-life objects, and reading of letters and words, was first demonstrated with our device."

Alongside the implant's undoubted success, the clinical trial also reported some potential stability problems affecting certain patients fitted with Alpha IMS. Wrobel indicated that Retina Implant has tackled these issues through changes to the design and procedures used, and that the company continues to focus on performance and reliability enhancements.

"We have been working intensely on solving these issues, and have made a lot of progress in the laboratory," he said. "These improvements are currently confidential and proprietary, but we are confident that we have solved these problems."

An animated illustration of the subretinal visual implant, from Royal Society Journals:

California-based Second Sight is taking an alternative approach to tackling RP, and has developed the Argus II system based around an epiretinal implant.

As well as the implant itself, the Argus II system includes an antenna, an electronics case, and an electrode array, along with external equipment including glasses, a video processing unit and a connecting cable. Visual information is first captured by the external camera and supplied to a portable computer for conversion into electrical stimulation. From there it is sent to the array on the retina. 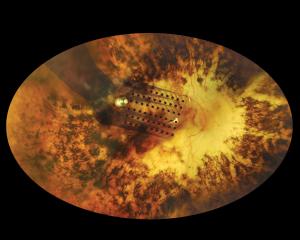 The complete Argus II retinal prosthesis system received approval from the US Food and Drug Administration in February 2013 for the treatment of individuals with late stage retinitis pigmentosa, having already received the equivalent European approval in 2011.

The epiretinal implant is placed in the inner surface of the retina, from where it directly stimulates the innermost ganglion cells and bypasses the retina's other layers.

"In RP a specific layer of the retina, the one formed by photoreceptors, is predominantly affected," commented Maura Arsiero of Second Sight. "Once the cells in this layer start perishing, the successive layers of the retina also go through a modification - a 'rewiring'"

This can present a problem in subsequent stimulation of a retina affected by RP, according to Second Sight. The information may not be transported correctly to the brain, or stimulation at a certain desired point might fail to induce the intended vision.

Argus II is intended to solve this issue by bypassing the damaged photoreceptors, and instead stimulating the still-healthy ganglions which transmit the visual information along the optic nerve. "With an epiretinal implant you bypass all this 'rewired' area, stimulating the ganglional cells that are the output layer of the retina directly and forwarding the info to the brain cortex," said Arsiero.

Clinical trials using the Argus II have focused on RP and on choroideremia, a retinal degenerative condition that affects the choroid layer of the eye. Arsiero commented that "The current approval indicates that this treatment is designed to address RP, although in the future we will probably investigate the use of this device with other diseases."