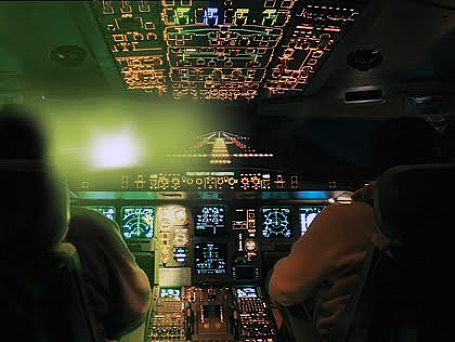 In the U.S. there are 10 laser attacks on airplanes each day.

According to the Federal Aviation Authority, the number of malicious laser-aircraft incidents in the U.S. alone during 2012 was 3,482 – an average of 9.5 incidents every night of the year. Fortunately only a small number of these (below 1%) resulted in serious injury or permanent damage.

Help may be at hand following the work of a research scientist a the University of Central Florida, based in Orlando, FL, USA.

Assistant Professor Jayan Thomas has developed a new material – partly based on a gold complex – using nanotechnology that could help keep pilots and sensitive equipment safe from destructive lasers. If the material is applied to goggles then it will safely deflect a laser beam aimed at the pilot’s eyes.

Assistant Professor Jayan Thomas, in collaboration with Carnegie Mellon University Associate Professor Rongchao Jin, chronicled their work in the journal Nano Letters. In the study, Thomas worked with gold nanoparticles, studying their optical properties when they were shrunk into nanoclusters. 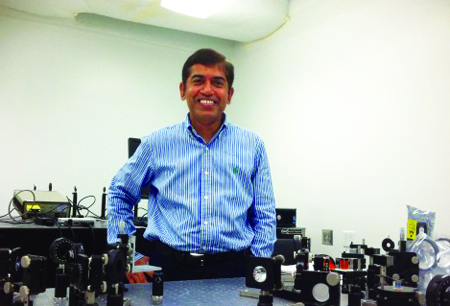 Thomas and his team found that nanoclusters developed by adding atoms in a sequential manner could provide interesting optical properties.

The study showed the gold nanoclusters exhibit qualities that may make them suitable for creating surfaces that would diffuse high-energy laser beams. They appear to be much more effective than gold nanocrystal, a material used by artists to make stained-glass windows.

Working at Thomas’s lab at UCF, the researchers found that if pilot’s sunglasses and helmet shields were coated with such nanoclusters, they could potentially diffuse high-energy laser beams. Furthermore, highly sensitive instruments needed for navigation and other applications could also be protected in case of a malicious (or enemy) attack by laser.

Thomas commented, “These results give me great pleasure because the technique we used to study the optical properties of these atomically precise particles is one invented by UCF professors Eric Van Stryland and David Hagan some years ago. The progression we’ve made is very exciting.”

Atomic clusters of metals are an emerging class of extremely interesting materials.

To explain his breakthrough, Thomas and the researchers from Carnegie Mellon University, were recently featured on Inside Science TV, a news segment produced by the American Institute of Physics – see link below.

In the video, Thomas explains the special feature of his material that shows great potential with respect to airline safety. He said, “The gold nanoparticles display unique properties because they allow normal light to pass through, but diffuse high-intensity laser light.”

But Thomas and his collaborators face some serious hurdles before the pilot’s anti-laser protection can become reality, as he told his local newspaper the Orlando Sentinel. He commented, “Not the least of these are the federal government's new deficit-reduction budget cuts.”

"It's going to be very difficult," said the laser researcher, who has won hundreds of thousands of dollars in grants since coming to UCF two years ago from the University of Arizona. So far, his laser-proof eyewear project has been financed solely by UCF and Carnegie Mellon.