Holoxica, the Edinburgh, Scotland-based developer and supplier of 3D holographic solutions has announced the availability of a new Interactive Holographic 3D Display, which it is calling a “second generation” prototype.

The design is inspired by Head-Up Displays (HUDs), based on free-space optics with images floating in mid-air that can change in real-time. A paper from Holoxica describing this HUD-style display was presented by the company’s CEO Javid Khan at the SPIE (International Photonics Society) Photonics West Conference in February 2013, and it was published in the conference proceedings.

The interactive holographic display system comprises a Holographic Optical Element (HOE) lens, a digital controller, a motion sensor and a projection subsystem (a laser projector) imaging a diffusion screen. The HOE measures approximately 200 x 300mm, and the images are formed in real space (in mid-air) about 200mm out from the hologram plane. 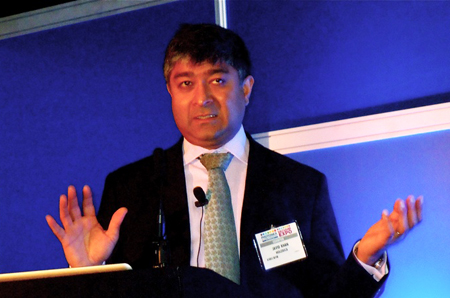 Khan described the holograms that this latest technology can project: “The images are about the size of a human hand (typically up to 70x70 mm).

"They can be refreshed at video rates and arbitrary images can be displayed. However, the images are formed in three distinct planes, corresponding to the colours of the lasers in the laser projector i.e. red, green and blue.

“The display incorporates a Kinect motion sensor [developed by Microsoft] to enable interactivity with a number of apps that we have written for it.

"The viewer can ‘touch’ icons in space and do things like draw in mid-air. We have about ten apps at the moment including mid-air drawing, pong-style game, counter, keypad, viewing image sequences. Immediate applications of this technology include HUD-style displays and novel user-interfaces with the added dimensions of real-space interactivity.

This latest display is an improvement over our first generation demo, which had a fixed number of images embedded in the holographic screen. The holographic images could be replayed in real space (mid-air) in real-time, in any sequence. However, this display was not able to display arbitrary images and there were some limits to its scalability.” 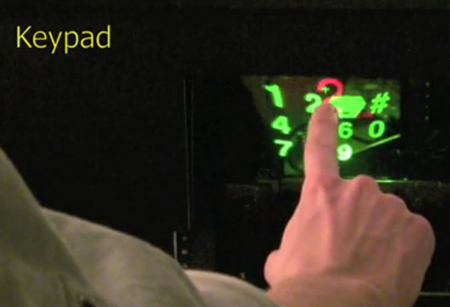 Holoxica's apps include a virtual keypad (above).

Khan added that he hopes that the new Holoxica technology will be sold to systems integrators who want to integrate it into diverse applications – “probably in the computer games field initially, but that there could also be interest from defense and medical device sectors”.

He told optics.org that to accelerate the development further – in order to enable Holoxica to be able to offer potential clients a hologram development kit, for example – would require further substantial investment and that he is currently looking for upwards of £1 million from investors to make this happen.

People interested in viewing the display can see it on The Gadget Show, FutureTech Edition, broadcast on 25th Mar 2013 (TV - Channel 5, UK). It will also be on display at The Gadget Show Live! between 2-7th April 2013 at the NEC in Birmingham, UK, which is expecting more than 60,000 attendees.