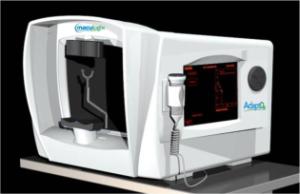 Age-related macular degeneration (AMD), a disease of the retina that affects the center of the visual field, is already the leading cause of adult vision loss and blindness in developed countries, and likely to become a substantially worse health issue as the population ages.

AMD progresses slowly, with five to ten years possible between the tell-tale pigmentary changes in a patient's retina marking the onset of the condition, and eventual severe vision loss. Treating patients as early as possible, before vision impairment becomes entrenched, is a key aspect of combating the disease.

This goal is made more difficult by the lack of adequate clinical trial endpoints marking the progression of AMD. Visual acuity is currently the only accepted functional endpoint, but this is minimally impacted until the disease has taken hold. Identifying those patients experiencing the onset of the condition but whose vision is not yet clearly affected would be a valuable step forward.

"Traditionally, AMD has been diagnosed through either fundus photography, using pictures of the retina to look for physical defects associated with AMD; or Amsler grid testing, looking for the visual distortions in an orthogonal grid of lines that is associated with the disease," said John Edwards, CEO of Pennsylvania-based MacuLogix. "Both of these techniques are only sensitive to the late stages of the disease."

One answer could be the AdaptDx system, developed by MacuLogix to provide a new clinical trail endpoint that should enable both early detection and early intervention.

AdaptDx is a dark adaptometer, an instrument for monitoring how a patient's vision adapts to darkness after exposure to bright light and measuring the minimum light thresholds that become perceptible as their vision adjusts. This recovery turns out to be affected by the retinal changes underway during the early stages of AMD.

"AdaptDx is based on technology developed by Gregory Jackson at University of Alabama at Birmingham," commented Edwards. "Joint work on this technology has demonstrated that dark adaptation speed, ie. the rate of transition from being light-adapted to being dark-adapted, is a sensitive, quantitative biomarker for AMD from its earliest stages, and that the amount of impairment closely correlates with disease severity."

Photobleaching and recovery
The correlation between worsening dark adaptation and the severity of AMD is thought to be the result of impaired nutrient and oxygen transport to photoreceptors in the retina. MacuLogix describes these effects as "not subtle. Dark adaptation is far more sensitive to early AMD than other markers such as fundus grade, visual acuity or contrast sensitivity."

But despite a known link between dark adaptation and AMD, quantified measurements of dark adaptation response as an actual diagnostic for the disease is a new breakthrough. This has partly been because until now such testing has been unwieldy, taking anywhere from 30 to 90 minutes to perform. 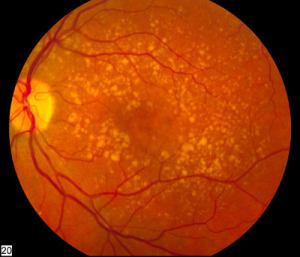 MacuLogix has reduced the procedure to a practical, highly accurate, five-minute screening test.

The patient's vision is first "photobleached," through exposure to a brief flash of 500 nm light lasting 11 ms or less. This is followed by scotopic sensitivity measurements, during which stimulus lights starting at 5 cd m-2 are presented to the patient. The intensities are varied, and the patient reports when the lights become visible.

Using LEDs as light sources has been one factor in the compact size and versatility of the system, according to Edwards.

"LEDs are used in AdaptDx for both photobleaching and subsequent stimulus presentations. In addition to being highly reliable and reproducible, LEDs satisfy the need for a very broad dynamic range in luminance. From the relatively bright camera-flash levels needed for photobleaching to the very dim stimulus presentations needed to determine visual sensitivity in the dark represents a range of more than six orders of magnitude."

Judicious choice of photobleaching intensity and test location can allow discrimination of early AMD patients from intermediate cases, based on their dark adaptation measurements and plots of their scotopic sensitivity against recovery time.

Formal introduction
MacuLogix has an exclusive license to the AdaptDx technology, and is now bringing the platform to market. In March 2013 it announced the raising of $3.6 million in Series A funding, specifically intended to accelerate manufacturing and commercial sales of the system; preparations for a Series B round are reported to be underway.

Basic 510(k) clearance from the FDA as a tool to evaluate dark adaptation speed was granted in February 2011, with second 510(k) clearance for expanded labeling as a diagnostic for AMD now pending. A follow-on application for CE marking to allow sales outside the US will be submitted in late 2013, according to Edwards.

"Gregory Jackson is now Chief Scientific Officer of MacuLogix and Associate Professor of Ophthalmology at Penn State College of Medicine," he commented. "We have been working with the University of Alabama at Birmingham, Penn State and others to reduce the original invention to a practical diagnostic tool, and the platform has been validated in more than a dozen clinical studies involving over 1000 patients."

• A formal introduction of AdaptDx will take place in early May at the annual meeting of the Association for Research and Vision in Ophthalmology, to be held in Seattle.