German optoelectronics firm re-iterates 5% forecast for overall revenue growth, with expectations of a “slight rise” in laser and optics sales. 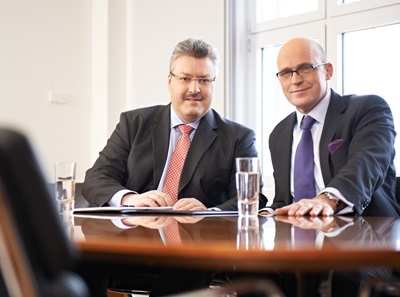 Jenoptik is maintaining its earlier forecast of modest growth in sales this year for both its lasers and optics business and the wider company, despite analyst predictions that the recovery of the semiconductor market will be slower than previously anticipated.

In its annual financial report, the German optoelectronics firm confirmed that its total revenues grew to €585 million last year – an increase of nearly 8% on the 2011 figure. CEO Michael Mertin and colleagues believe that the sales figure could grow another 5% in 2013, although the performance of the semiconductor sector is likely to prove crucial.

Analysts at Gartner recently adjusted their expectations of the 2013 semiconductor market downwards, revising an earlier estimate of $330 billion to $311 billion on forecasts of weak PC sales and high inventory levels held by chip makers.

Like many laser manufacturers, the semiconductor market is a very important commercial sector for Jenoptik, although any additional weakness should be counterbalanced by the growth of applications requiring lasers and optical components in healthcare and consumer electronics such as displays.

Signs of the impact of the current weakness of the semiconductor market could be detected as sales from Jenoptik's lasers and optical systems division fell 13% year-on-year to €50.6 million in the closing quarter of 2012.

Getting “fit for growth”
As far as Jenoptik is concerned, 2013 will not see any major acquisitions, but modest organic growth ahead of a more meaningful upturn in 2014 as the semiconductor sector moves into a stronger phase with the expected adoption of extreme ultraviolet (EUV) lithography and development of 18-inch wafer platforms on which to produce future generations of silicon chips. 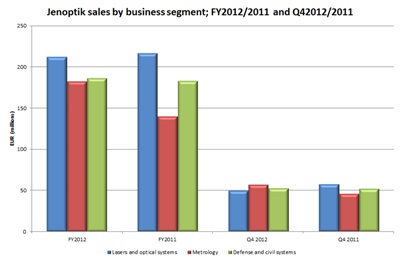 Jenoptik’s mid-term aim is to increase turnover to €800 million by 2017. In a company statement, Mertin said that “mega trends” in the areas of energy efficiency, security, healthcare, mobility and increasing global digitalization would support growth of the optoelectronics business.

This year will see Jenoptik invest in further expansion of its sales structures and product innovation (for example in laser diodes), as well as optimizing its internal processes. “By taking this approach we are getting ourselves ‘fit’ for further growth,” is how CFO Rüdiger Andreas Günther describes it.

“We see these processes as an important building block for enabling us to continue achieving top performances in the global competition,” he added. One of the actions already taken is for Jenoptik to concentrate its optics manufacturing in North America at a single location.

Photonics21 keynotes
In just over a month, Mertin will mark his recent appointment as the president of Photonics21 with what could turn out to be a landmark presentation at the European industry group’s annual meeting in Brussels.

According to the draft agenda posted by Photonics21, Mertin will concentrate on the establishment of a public-private partnership (PPP) in European photonics, something seen widely as a critical element of the future industry in Europe.

A key player in those discussions, the European Commission’s vice president Neelie Kroes, is set to follow Mertin with a keynote talk after the ceremonial handing-over of a photonics “roadmap” outlining the intended future development of the sector.

In between those talks, one of the hottest applications in photonics right now – that of precision 3D printing – will be highlighted, with violinist Pauline Klaus lined up to play a Bartók sonata on a laser-printed instrument.

For the full line-up scheduled in Brussels, which will also include talks on the role of photonics within the forthcoming Horizon 2020 research program and as a key enabling technology, visit the Photonics21 web site.