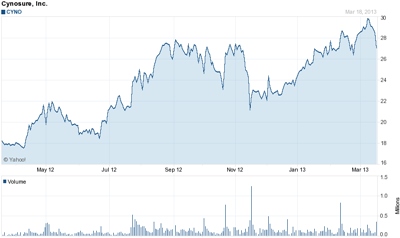 On the up: Cynosure stock rise helps fund Palomar deal

The market for aesthetic lasers, long thought ripe for consolidation, is to get exactly that with the news that Cynosure is set to acquire fellow Massachusetts company Palomar Medical Technologies, and subsequently move into Palomar's facility in Burlington.

Subject to shareholder and regulatory approval, Cynosure has agreed to pay $294 million – half in cash and half in stock – for Palomar, representing a premium of more than 20% on the company’s recent stock performance.

Both firms specialize in laser- and light-based cosmetic and aesthetic applications, such as tattoo, hair, cellulite and wrinkle removal. Together, they have so far installed more than 20,000 such laser systems worldwide.

Addressing an investor call to discuss the plan, Cynosure's CEO Michael Davin described it as “a momentous day” for the two firms, and said of the rationale behind the move:

"Combining with Palomar complements our product portfolio and customer base, adding new product and service revenues, strengthening our global distribution network, creating new cross-selling opportunities and enhancing our intellectual property position with the addition of more than 40 patents."

“We believe that this transaction creates a company with the industry’s broadest aesthetic laser capabilities and most comprehensive product portfolio,” the CEO added, while also pointing out Palomar’s sales strength in Japan and Australia as complementary to Cynosure’s.

Entrepreneurial spirit
Last year, the combined revenue of the two companies was more than $234 million, with 52% of product revenue coming from North America and 48% originating from international markets.

However, Palomar swung to a net loss of $6.2 million in 2012 as revenues declined 20% on the prior year – though that was in large part due to the benefit of a major patent litigation case won by the firm in 2011, and the underlying trend has seen significant growth in sales of professional laser systems.

Cynosure, on the other hand, posted a sharp uptick in sales and a net profit of $11 million for the year. Last November it raised some $55 million in a public offering of stock that signaled the likelihood of a subsequent acquisition.

In June 2011, the company had made a similar move with the $24.5 million cash buy-out of HOYA Corporation’s “ConBio” subsidiary – giving it access to a Q-switched Nd:YAG laser technology.

Then in October 2011, the firm expanded into onychomycosis (toenail fungus) treatment by acquiring worldwide exclusive rights from NuvoLase to distribute the “PinPointe FootLaser”, which kills fungus that lies in and under the nail without damaging the nail or the surrounding skin.

Joseph Caruso, the CEO of Palomar, said in a joint statement by the two firms: "Our board of directors and management team believe that this transaction makes strategic sense for our company, offers an attractive premium to our shareholders and creates exciting opportunities for our employees. Both companies share the same passion for innovation, and this combination creates a single, unified organization that is positioned for continued success."

In the investor call, he added: “It would be difficult to find two organizations where the entrepreneurial spirit and the enthusiasm to develop superb technology is any stronger.”

An example of recent innovation at Cynosure is the development of picosecond pulsed systems to improve the effectiveness of laser tattoo removal, while Palomar has rceived FDA clearance for a dual-wavelength system for laser liposuction.

Transaction detail
If approved, the deal will see Palomar shareholders receive $13.65 per share of Palomar common stock, exactly half in cash and half in Cynosure common stock. Cynosure will issue approximately 5.2 million shares in the transaction and fund the $147 million cash part through its existing cash holdings.

The transaction has already been unanimously approved by the board of directors of each company, Cynosure and Palomar said. They expect the deal to be closed in the third quarter of this year, after which Cynosure shareholders will own approximately 77% and Palomar shareholders will own approximately 23% of the combined company.

The two CEOs have already worked out which roles they will perform, assuming the acquisition is completed as expected. Davin is set to serve as Cynosure’s chairman and CEO, while Caruso will join the company’s board as vice chairman and will also serve as the company president.

Cynosure ultimately plans to relocate its headquarters from Westford, Massachusetts, to Palomar's owned facility, just 15 miles away in Burlington, the companies added.

Caruso and Davin also said that they had identified up to $10 million in cost savings that the combined company could benefit from – mostly resulting from overlapping sales and administration activities – from 2014.