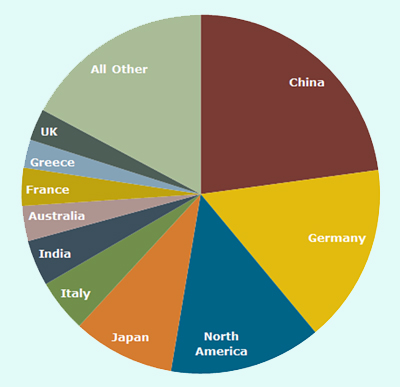 Global solar photovoltaic demand will increase by two gigawatts, from 29 GW to 31 GW, during 2013, up 7% year on year according to the analysis from NPD Solarbuzz Marketbuzz 2013.

For the first time, China will outpace Germany to become the leading PV consumer, while the top 10 PV territories will still account for 83% of global PV demand.

Michael Barker, senior analyst at NPD Solarbuzz, commented, “2013 will represent another transition year, as the PV industry adjusts to softness across legacy European markets. The Chinese end-market will largely compensate for the downturn in demand from Germany, which previously led PV demand.”

Due to further reductions in European premium incentives, demand in this region will fall to approximately 12 GW, which is a 26% Y/Y decline. In contrast, new policies across leading PV countries in the Asia-Pacific (APAC) region, led by China, Japan, and India, will stimulate regional growth of over 50% and account for more than 11 GW of PV demand in 2013.

“In 2013, we expect to see improvement in the market fundamentals that enable PV demand to return to double-digit growth,” Barker added. “Installed-system prices will continue to fall, and PV will become increasingly cost competitive across regions with high electricity rates, shortages in domestic supply, and growing renewable obligations to fulfill.”

According to the report, new PV opportunities from the Middle East, Africa, Latin America, Southeast Asia, the Caribbean, and other emerging regions will have a stronger impact on global demand from 2014 onwards. Emerging regions are forecast to account for less than 8% of global demand during 2013; however, this market share is expected to double by 2017, driven primarily by South Africa, Saudi Arabia, Thailand, Israel, and Mexico.

Further fragmentation of the supply chain for PV modules and balance-of-systems components is expected across a range of addressable markets due to shifts in geographic access, new and ongoing import trade barriers, and changes in PV application segments.

“Global trade wars and excessive local manufacturing capacity levels will create micro-environments for PV supply and demand, with each PV supplier serving only a subset of the 31 GW demand total,” Barker said.

Ground-mount installations will dominate the market in 2013 with 45% of PV demand. These installations are being driven by policies that favor utility-based deployment. Strongly influenced by Japan, Germany, Australia, Italy, and the UK, overall market share for residential PV in 2013 will remain above 20%. These five countries will account for three-quarters of all residential PV installations this year, which highlights a broad geographic pull and emphasizes the continued importance of distributed generation. 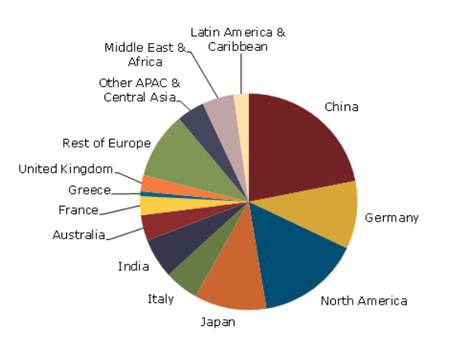 SolarBuzz's 5-year forecast says there will be 230 GW of new cumulative demand.

In a second market report, this time considering the next five years, Solarbuzz predicts that PV demand (not just capacity) will hit 230 GW in the coming five years.

This forecast predicts that many of the industry's recent problems around oversupply, squeezed prices and margins, and reduced subsidies, are likely to continue during the course of 2013 and probably well into 2014, by which time the PV industry will have gone through the “most brutal transition phase” of its relatively short history.

However, despite this climate of uncertainty and investment caution, the five-year end-market demand forecasts for the solar PV industry remain strong: the most likely forecast scenario is that between 2013 and 2017, the PV industry will cumulatively add over 230 GW. Almost half of this 230 GW will be driven by large-scale ground-mounted solar PV projects, it says.

Finlay Colville, Vice President, Solarbuzz, concluded, “Ultimately, the challenge for the industry over this time period will be to restore financial health and establish a credible position against traditional energy sources within the framework of renewable energy adoption.”

According to the report, starting from 2013, China will become the largest country market for PV demand. This will elevate China to become the leading driver in the supply and demand segments of the industry.

However, a new group of emerging PV markets is poised for strong growth. This group includes Latin America, the Caribbean, the Middle-East, Africa and all counrties across the Asia Pacific region (excluding China, India, Japan and Australia).