Suntech blames import tariffs as it shuts US panel factory

Escalating costs made worse by US import tariffs on solar cells sees 43 jobs lost in Arizona. 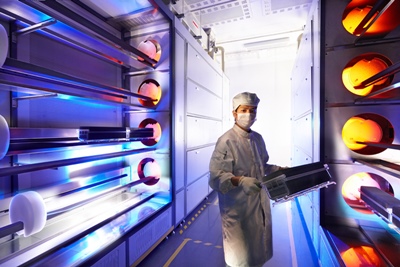 Suntech Power Holdings, the embattled maker of solar cells, modules and panels, is to cease production at its solar panel manufacturing facility in Goodyear, Arizona, next month, with the loss of 43 jobs.

“Higher production costs exacerbated by import tariffs on solar cells and aluminum frames imposed by the US government, as well as global solar module oversupply, contributed to the facility's closure,” said the China-headquartered company, which is also in the process of renegotiating huge debts amid a boardroom split.

The decision to shut the panel facility - less than three years after it was opened - is part of Suntech's wider restructuring efforts, in which it is aiming to rationalize production capacity and reduce operating expenses by one-fifth this year.

E.L "Mick" McDaniel, the managing director of Suntech America, the parent company’s US subsidiary, said of the decision: "These are the growing pains of a maturing industry; although it's a tough time to be a solar manufacturer, there's never been a better time to be a solar customer."

The move comes a few months after the US International Trade Commission voted to impose unilateral tariffs of 35.97% on Suntech solar cells produced in China, components that were used in the panels made at the Goodyear production facility.

The imposition of those tariffs, of which Suntech was highly critical, came on top of an earlier decision on aluminum frames, which are also critical parts of solar panels. “Both tariffs have made it more challenging for Suntech to cost-effectively manufacture solar modules in the US,” said the firm.

Global rationalization
The Goodyear facility was opened in October 2010, and reached peak production of 50 MW per year in 2011, but last November, following the USITC’s final decision and amid a huge global oversupply of PV cells and modules, annual throughput was scaled back to just 15 MW.

"Rationalizing production capacity is necessary to improve our manufacturing utilization and help Suntech to return to profitability," said David King, Suntech's CEO. "We're hopeful that these tough decisions will help put Suntech back on track for growth."

The Arizona shutdown was announced just a day after Suntech reached an agreement with a majority (60%) of creditors to delay by two months the repayment date for a $541 million convertible bond.

King said that the delay demonstrated bondholder support for the company while the parties involved worked towards a restructuring of its debt. The bond that had been due for repayment on March 15 is part of a wider $2.2 billion owed, according to Reuters, while Suntech’s management has come in for criticism for its decision-making during an extended period of turmoil in the solar industry.

“We are making progress and are working to find a resolution soon,” the CEO said of the debt restructuring. “At the same time, we are continuing our cost and operational review to further improve our efficiency.”

Debts also weigh on SolarWorld
But those moves could be hampered by a major boardroom row. Last week Suntech had appeared to fire Zhengrong Shi from his position as executive chairman, only for the company founder and long-time CEO to announce the following day that he would not be stepping down from the post.

Reuters is also reporting that SolarWorld, the Germany-headquartered PV company that originally sparked the imposition of US import tariffs on Chinese-made cells with its complaint to the USITC, may delay its annual financial results conference as it battles its own debt problems.

SolarWorld is reported to have long-term debts in excess of €1 billion, and will delay the announcement scheduled for March 21 unless a deal with creditors is reached by then.

Although global demand for PV continues to grow, the rate of that growth has stalled since 2011, with industry analyst Solarbuzz reporting a flat demand of around 29 GW in 2012. It expects growing installations in China to boost demand by 7% to 31 GW this year, while Germany’s market will shrink significantly as once-generous feed-in tariff levels are phased out.