Jerry Rawls suggests that threat of the emerging technology has been exaggerated. 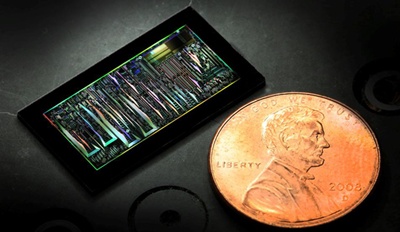 Jerry Rawls, the chairman of leading optical networking component vendor Finisar, has played down the potential threat of silicon photonics, following development of the emerging technology at Cisco Systems and elsewhere.

“I think there’s been a lot of gross exaggeration about the ‘threat’ of silicon photonics.”

The comments came amid concern from some quarters that Cisco, which is a key customer of Finisar, is developing silicon photonics products that are competitive with high-speed transceivers sold by Finisar that are based on the more conventional compound semiconductor format.

Highlighting the 100 Gb/s speed and low power consumption of his company’s latest products, Rawls said: “I don’t think it’s a net positive for us that a large customer would choose to go and make its own optical transceivers – that can’t be positive – but we don’t yet know what the impact of that will be.”

The comments come more than a year after Cisco said it would acquire the US company Lightwire, which specializes in silicon photonics transceivers. At the time, Cisco said that Lightwire’s products would be aimed at data center and service provider customers.

Asked whether the wider development of silicon photonics technology posed a threat to Finisar’s business, or whether the company had plans to adopt it, Rawls said:

“It is an interesting technology, but it is one that we haven’t used so far in our products, because [either] it wasn’t economical, or it didn’t provide competitive performance.

“The question is [whether] in the future we will use silicon photonics, and the answer is ‘maybe’. We are absolutely agnostic when it comes to technology, and we will use whatever makes sense for our customers.”

The silicon photonics theme is likely to be a strong one at the annual OFC/NFOEC trade show in Anaheim, California, next week. A panel session at the event will focus on some of the often-overlooked issues facing the technology – such as proving out reliability – while the venture-backed start-up Skorpios Technologies is set to demonstrate its full C-band tunable laser, which is produced using a silicon CMOS process and incorporates III-V semiconductor material.

Headed up by an executive team that was formerly at photonic component maker Emcore, the Albuquerque, New Mexico, company has gained plaudits from the networking industry for its “silicon-embedded” chip, which unlike many other hybrid material approaches does not require any post-production steps such as flip-chip bonding or complex optical alignment.

Quoted in a Skorpios statement, Ericsson’s VP and head of IP broadband networks Jan Häglund said that the tunable laser devised by Skorpios “removes the last barriers towards a CMOS ASIC-like business model for optics”.

Antonio Teixeira from Nokia Siemens Networks added: “It is thrilling to see in the lab the achievements on the silicon embedded tunable laser. This opens a clear path for high photonic integration in a low-cost material system fitting ideally to new metro access applications.”

“Quantum leap”
The tunable laser is foundry-manufactured using Skorpios’ wafer-scale “STAB” process for optoelectronic integration and is, according to CEO and founder Stephen Krasulick, just the first example of an entire class of devices enabled by the company’s proprietary approach.

“This is a quantum leap forward in the level of photonic integration, and represents a key missing piece of the silicon photonics puzzle, moving the laser in-chip and delivering a truly single-chip solution,” said Krasulick.

“Not only does this enable for the first time WDM solutions to be deployed within the data center, but also dramatically reduces the capital expenditure requirements for long-haul and metro communication networks.”

• Finisar has also signed a new partnership deal with France-based 3S Photonics that will see the Nozay company become the exclusive supplier of 980 nm laser chips in Finisar’s development of a new packaging platform for cooled laser pump modules.

Finisar is set to implement a manufacturing line based on the platform at its newly expanded facilities in Wuxi, China, and will use the 980 nm modules in fiber amplifier and line card products for the telecom market. 3S will be able to use the new platform to serve its own customers.

With the lasers already field-qualified, pump modules based on the new packaging platform should be available by the middle of the year.