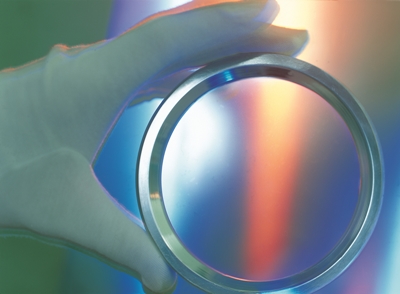 Element Six, a subsidiary of the mining giant De Beers, says that it is ready to respond to a sharp increase in demand for diamond optics in the coming months, as extreme ultraviolet (EUV) lithography tools move towards commercial production.

The company, which produces synthetic diamonds at its facility in Santa Clara, California, told optics.org at the recent SPIE Photonics West event that its diamond optical windows – claimed to be the largest ever produced – would help to “change the economics” of EUV lithography.

Because the EUV source in the tools being developed by ASML is created using a hugely powerful carbon dioxide laser (around 40 kW) aimed at tiny droplets of tin inside a vacuum chamber, the optical windows used in the source require some extraordinary properties.

That is exactly what diamond, with its extremely thermal conductivity, shock resistance and broadband optical transmission, offers, although it is very difficult to manufacture at the kind of sizes needed for the lithography application.

Having recently expanded its chemical vapor deposition (CVD) manufacturing capacity by 50% in Santa Clara, Element Six says it now has four-times the production scale of any of its rivals. “Diamond will not be the bottleneck,” said Henk de Wit, the firm’s business manager for optical applications.

EUV delays
The development of EUV tools suitable for use in production semiconductor fabrication facilities has been beset by technical difficulties, with the generation of a suitably powerful, reliable and stable EUV light source turning out to be the biggest problem area.

Although there have been lingering delays with the development of EUV tools by ASML, the Netherlands-headquartered company said last month that it had now demonstrated a 40 W source with the kind of stability required for volume chip production, en route to its targeted 105 W.

Although there remain some anti-competition regulatory hurdles to negotiate before the deal is completed, a closer relationship between ASML and Cymer should help to accelerate any fine-tuning of the EUV sources and their eventual proliferation.

Keeping pace
And Element Six says that it will be ready to provide the necessary optics when that does happen. Head of Technologies at the company’s Ascot, UK, site, Adrian Wilson said that he had already witnessed a sharp upturn in demand for diamond optics – a 30% growth rate since 2011 – and that Element Six “will be able to keep pace” as EUV becomes more widely deployed. 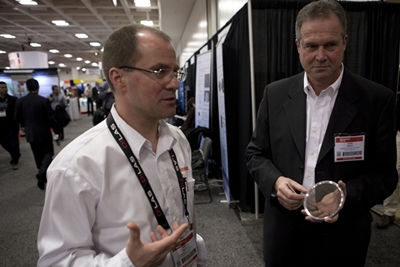 In terms of units, the volume of diamond optics required is certainly not huge: ASML said in January that it expected to ship no more than eleven production EUV tools this year, followed by between eight and twelve in 2014.

But, assuming that the technology performs to expectations and finds wider use, those numbers will ramp up in the following years. ASML estimates shipping between 30 and 36 EUV tools in 2015 and more than 60 per year thereafter.

Outside of the key EUV application, Element Six said that its diamond optics were also in demand for high-power laser materials processing and for high-performance prisms used in infrared spectroscopy, while the technology is also used in the detector units employed to search for the Higgs boson elementary particle at the Large Hadron Collider.