News that the UK technology firm Oxford Instruments is aiming to buy out Andor sends stock up 25%. 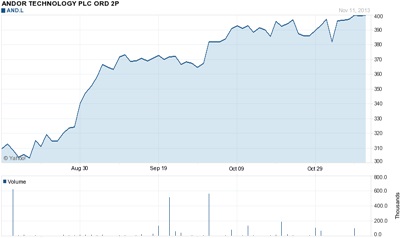 Andor Technology, the fast-growing Belfast, UK, company that sells photonics imaging equipment, has soared in value following news that Oxford Instruments is considering a cash bid of around £166 million to acquire it.

But in making news of the possible 500p-per-share offer public through a statement to the London Stock Exchange without Andor’s consent, Oxford has elicited a frosty response from the imaging firm – which called the move “premature and unhelpful” while the two companies remain engaged in discussions.

The buy-out price represented a 25 percent premium on Andor’s November 11 closing share price – the day before the potential deal was revealed – and sent its value soaring by just under that amount when markets opened on November 12.

Oxford says that it first approached Andor with a proposal of 420p per share on July 9. It has since raised the offer price first to 470p and then to 500p following initial due diligence, and after Andor acquired two businesses in North America.

Together, those two acquisitions added some 51 new employees to Andor’s books, and they should increase the company’s annual turnover by around £7 million initially.

Due diligence continues
For the financial year that ended September 30, 2012, Andor posted revenues of £58.3 million. And although trading since then has been hampered by cuts to government-funded research around the world, according to Andor’s October 2 trading update recent order intake has improved significantly thanks to solid demand from OEM customers.

According to London Stock Exchange rules, Oxford must either follow up with a firm commitment to buy Andor, or withdraw its offer, by 5pm on December 10.

In the meantime, Oxford is continuing with its due diligence. In an email sent to Andor’s board of directors on November 8, Oxford chairman Nigel Keen wrote that the company wanted to be able to make a joint announcement of a recommended buy-out in time for release in Oxford’s half-yearly results on November 12.

That did not leave enough time for the two firms to agree on a joint announcement, but Oxford decided to go public anyway. In its response, Andor said it was “disappointed that, having only made the indicative proposal on November 8, Oxford Instruments has chosen to make today's announcement”.

Andor’s board added that it considered that move to be “premature and unhelpful in light of ongoing discussions”, but said that it remained open to discussions, saying:

“Given the level of uncertainty and conditionality, the Board of Andor felt that it could not properly consider the proposal, but it did confirm to Oxford Instruments that it remained willing to continue discussions to explore whether a definitive, acceptable offer might be found that was in the interests of Andor shareholders.”

Strategic thinking
In its own half-yearly results, Oxford Instruments posted a slight decline in both sales and orders, to £166.3 million and £168 million respectively, but said that market conditions were improving.

Oxford also explained its strategic thinking behind the planned Andor deal, saying that it was evaluating acquisitions that would spur growth in what it calls the “Nano-Bio” market – meaning areas like genomics, protein folding and DNA modelling that involve the analysis and manipulation of organic molcules.

Many of Oxford’s existing products are based on more traditional technologies, whereas Andor’s expertise would give it an entirely complementary line of business that is growing in popularity with biologists.

“Andor’s technology would extend our capability into the optical domain, which is the primary technology used for analysing biological samples at the nano scale,” says Oxford, whose share price rose by nearly 10 per cent following the trading update and Andor news.