Stock price at highest level in more than a decade as the laser vendor beats sales target in latest financial quarter. 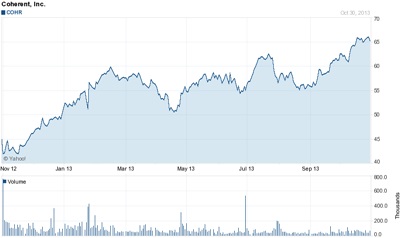 Coherent saw its stock price rise to levels not seen since the heady days of 2000 as the Californian laser giant reported better-than-expected sales for the closing quarter of its fiscal year 2014.

For the three months that ended September 28, the Santa Clara firm posted revenues of $213.1 million – down very slightly on a sequential basis but up strongly on the prior year and beating the company’s earlier prediction of between $200 million and $210 million.

Semiconductor rebound
Despite a slight fall in pre-tax profits for the full fiscal year – something that was in any case offset by lower taxes thanks to exemptions relating to its Korean operations – Coherent’s stock price continues to trade at decade-long highs.

Closing at $65.33 on October 30, the company’s stock is now trading at a higher price than at any time since the heady, telecoms bubble days of 2000.

They included a marked rebound of activity in the semiconductor market. Coherent is benefiting from developments such as Intel’s introduction of new three-dimensional “FinFET” devices, which is requiring investment in new optical test and measurement equipment.

On top of that was a $15 million order from a key customer for excimer laser annealing (ELA) equipment, with a substantial follow-up order anticipated by early 2014, as well as solid demand for lasers being used in cataract surgery, dentistry and materials processing.

“As we begin fiscal 2014, we are in a great market position,” Ambroseo told investors. “We’re the leader in three of the four markets that we serve.”

Positive feedback
In the materials processing sector, which is the only one where Coherent does not rate itself as the market leader, orders were down sharply from the preceding quarter and on last year’s figures as Coherent continues to try to establish a presence in high-power fiber lasers.

Ambroseo said the company had received “positive feedback” on its 3 kW fiber laser system, but stressed that Coherent was trying to avoid building custom products for individual customers in this area.

More immediate benefits are apparent in the flat-panel displays (FPD) market, where Ambroseo said that the development of flexible smart phone displays, ultra-high-resolution “4k” LCD TVs and organic LED (OLED) screens based on low-temperature polysilicon (LTPS) backplanes would all help to stimulate more demand for lasers and laser processes.

“4k TVs are gaining traction due to their terrific clarity and more manageable price [than OLED TVs],” the CEO said. “This has led to resurgence in two laser-based manufacturing steps for light guide panels, which act as homogenizers for the LEDs, and encapsulation or frit welding.”

Ambroseo also noted Samsung’s new “GalaxyGear” smart watch, but played down any expectations that it would prompt any surge in laser requirements:

“While it has a cool factor, the small screen will not consume very many LTPS panels,” said the CEO, before quipping, “Don’t let that stop you from getting your best Dick Tracy on.”

European investment
In the scientific market, which has been impacted by sequestration and budget delays in the US and reduced government spending on research elsewhere, Coherent nevertheless saw strong demand for its ultrafast Chameleon platform as orders in the sector rose steadily.

Ambroseo also highlighted two areas of major investment in Europe that will impact photonics, namely the Extreme Light Infrastructure (ELI) project in the east of the continent and the Horizon 2020 innovation program that will begin in the new year.

“Embedded within the Horizon program are two flagship projects to study the human brain and graphene, a potential successor to silicon in microelectronics,” the CEO said. “These projects will create jobs and drive capital investment, some of which will flow through to the photonics industry.”