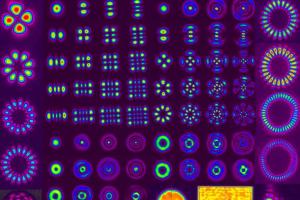 A variety of modes

A team at the Council for Scientific and Industrial Research (CSIR) in Pretoria, South Africa, has demonstrated a new method for intra-cavity control of a laser beam's profile. The work was published in Nature Communications.

Different intra-cavity methods for shaping a laser beam have been investigated for some time, since the approach holds some inherent advantages over the use of diffractive elements or other components to alter the beam profile once it has left the cavity.

However, these intra-cavity techniques have to date required the implementation of custom optics and other optimization techniques, or needed additional external beam-shaping components.

The CSIR team have attacked the problem through the use of intra-cavity digital holograms, implemented on a reflective spatial light modulator (SLM) that sits as one of the cavity mirrors. This effectively replaces one of the standard cavity mirrors with a rewritable holographic mirror.

Several different SLMs were tested, but the team settled on a Hamamatsu component using liquid crystal on silicon (LCOS) technology, in which liquid crystals controlled by a direct voltage modulate the wavefront of the light beam.

In use, the SLM is used to display computer-generated holograms encoded as pixelated grey-scale images. The task of creating custom modes "is reduced to that of creating pictures of what you want, and the tools to do this are very well established given the vast literature on shaping light with digital holograms," observe the team in the Nature paper.

"Our digital laser uses the liquid crystal display as one of its mirrors that is fitted at one end of the laser cavity," confirmed Andrew Forbes of the CSIR mathematical optics research group. "Just as with LCD televisions, the LCD inside the laser can be sent pictures to display. When the pictures change on the LCD inside, the properties of the laser beams that exit the device change accordingly."

Modes on demand
The team initially programmed the holographic mirror to mimic conventional concave mirrors, to ensure that the resonator formed a stable cavity. Further experiments then followed, creating advanced laser modes by changing the grey-scale image making up the digital hologram.

Some of these trials created modes traditionally generated by phase-only diffractive optical elements, or amplitude-only filters, or combinations of the two. But in each case the modes required only a change to the picture contained in the SLM, without any new optics or additional alignment of the laser cavity. 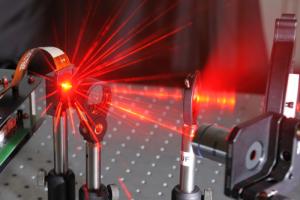 "No one has ever suggested or demonstrated on-demand laser modes with just a click of a button," noted Forbes.

"Of course there have been many attempts to shape light inside a laser cavity, but the digital laser is fundamentally different from these. This is best illustrated by the experiment where we 'played a movie' inside a laser for the first time. There is no way this could have been done with any previous technology or idea related to intra-cavity beam shaping."

That particular experiment involved the team programming the LCD to play a video of a selection of images representing a variety of desired laser modes. The result was that the laser output changed in real-time from one mode shape to another.

"Going forward, I think we have a very nice proof-of-principle experiment now, and the challenge is to turn it into a working prototype for particular applications," commented Forbes. "One example might be additive manufacturing: rather than scan the laser spot very rapidly to mimic the shape you want to create, the digital laser could be programmed with a movie to create the desired shape at each instant in time - no scanning required."

Other applications might arise in multiplexing applications, if the laser can be programmed to output specific modes in real-time for use in fiber communications or free-space communications. "There are many potential ideas," said Forbes.