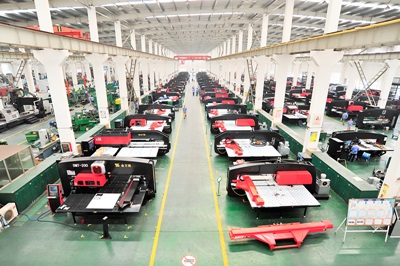 On the back of record-breaking sales in its latest financial year, Trumpf has revealed a strategic move into China with the acquisition of a majority stake in the machine tool company Jiangsu Jinfangyuan.

Germany’s largest laser company posted sales of €2.34 billion in the financial year that ended June 30 – up only 1 per cent on the previous year, but representing the highest figure in the firm’s 90-year history.

Nicola Leibinger-Kammüller, president of the family-run Ditzingen company, admitted that the year-on-year sales increase was small, but added: “In view of the extremely difficult market conditions we had to face, we can certainly be happy with this result.”

Acquiring a 72 per cent stake in Jiangsu – a strategic move that Trumpf says it has been working on for more than two years - will add to those sales figures in the future.

The Chinese firm, which sells both traditional and laser-equipped machine tools, is said to have posted sales of €70 million in 2012. Its laser cutting tools include one model featuring a 4 kW carbon dioxide source, and another equipped with a 500 W fiber laser provided by Trumpf’s UK-headquartered SPI subsidiary.

Laser sales jump 8 per cent
The majority of Trumpf’s revenues come from sales of machine tools, sales of which grew nearly 3% to reach €1.94 billion in the latest year. That figure includes both laser and non-laser tools, but Trumpf says that the largest proportion relates to laser flatbed machines – where customers are increasingly requesting systems equipped with solid-state lasers.

Trumpf’s laser technology division reported more rapid growth, albeit at a slower pace than the previous year, when laser sales jumped 24 per cent. For financial year 2012-2013, sales of lasers grew by nearly 8 per cent to reach €684 million.

And despite being in its infancy, the market for extreme ultraviolet (EUV) lithography tools is already having a major impact on Trumpf’s laser sales. Demand for this single application, where high-power carbon dioxide lasers are used to drive a source plasma that emits EUV radiation at 13.5 nm, accounted for more than 10 percent of the €684 million sales figure.

With key supplier ASML currently putting together eleven EUV lithography tools for its initial customers, power upgrades in the field to come and annual tool shipments expected to grow to 30 units in 2015 and twice that figure in 2016, the scope for Trumpf to grow future sales in this area is huge.

“Because of increased use of lightweight construction materials in the automotive sector, our sales in that sector continued to rise. With cutting applications in sheet metal processing there is a noticeable trend toward solid-state lasers, and this resulted in a moderate drop in sales of carbon dioxide lasers for machine tools.”

Offsetting the solid growth in laser and machine tool sales at Trumpf were the company’s medical technology and electronics businesses, which both reported lower sales than the prior year.

Ingeneric acquisition
With increased headcount – the total number of Trumpf employees increased by some 370 in the latest year – and a sharp uptick in research and development spending, Trumpf’s profit margins suffered in 2012-2013.

Income before taxes fell 27 per cent on the prior year, to €154 million. However, with R&D spending up 9 per cent to €211 million, and no fewer than 1430 employees working on future technologies, Leibinger-Kammüller stressed the importance of that investment.

“This is the highest amount we have ever spent on research and development in one single year,” remarked the company president. She also noted, in relation to both R&D spending and the additional staff costs:

“All this costs money in the short term, but in the long term these investments will pay off – and thinking long-term has always been one of the major strengths of family-owned companies.”

As well as investing heavily in its production and development facilities in Japan, Germany and Switzerland over the past year, Trumpf’s annual report confirmed that it last month acquired an 80 per cent share of the precision optics firm Ingeneric.

Based in Aachen, Germany, the Fraunhofer spin-out has developed components such as tilted microlens arrays that are designed to optimize optical coupling of high-power laser diode bars, and also offers customized designs.

As with the Jiangsu deal, Trumpf did not disclose the value of the Ingeneric acquisition.