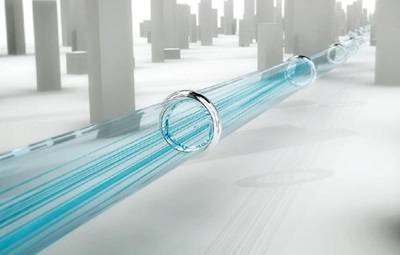 The investment is only the fourth to be made by Moscow-headquartered QWave – but not its first in photonics. It has already backed the US firm Centice, which offers a proprietary “coded aperture” Raman spectroscopy and hyperspectral technology, as well as Estonia-based gallium arsenide diode developer Clifton and metamaterials specialist Nanometa Technologies.

Originally a spin-off from the University of Geneva in 2001, ID Quantique came to prominence in 2007, when its quantum key distribution (QKD) system was used to encrypt the transmission of data relating to votes cast in Switzerland’s national elections.

Single-photon counters
Aside from pioneering the commercial development of QKD, the company also sells a range of single-photon counting modules, with models featuring silicon detectors operating in the visible range and others with InGaAs photodetectors for infrared applications.

In June 2012, the giant US research and development organization Battelle said that it and ID Quantique would establish a QKD link between its Columbus, Ohio, headquarters and an office 12 km away in Dublin.

Just a week ago, Battelle announced that the two firms had completed that link, said to be the very first commercial QKD-protected network in the US. The fiber-optic link is set to carry sensitive data such as financial information, intellectual property and designs.

QKD roll-out
But that is just the start of what is expected to be a much larger roll-out of the technology:

“In the next few years, all Battelle locations in central Ohio will be connected to the [QKD] network and by 2015, Battelle offices in Washington DC will plug in,” says the firm. “Battelle experts know that the data protection industry is on a steep upward learning curve and intend to lead the industry by protecting itself first and consulting with others as soon as possible.”

One of the key logistical problems with the deployment of QKD networks in the US is the sheer size of the country. That is because the attenuation of fiber-optic cables limits the range of a single photon to “only” 60 miles.

In order to extend the protected reach, repeaters known as “trusted nodes” must be established. Battelle says that it is developing a scalable architecture with ID Quantique including such nodes, so that QKD will be able to operate over much longer distances.

According to Battelle’s general manager Kevin Boyne, this technology will underpin the Columbus-DC connection, which at more than 400 miles will become the world’s longest QKD network when completed in 2015.

Unique combination
Serguei Kouzmine, managing and founding partner at QWave Capital, said in a statement: “ID Quantique and quantum key distribution are the future of communication in industries where security and confidentiality are mission-critical.”

“This technology and this company exist because of the tremendous opportunity presented by advancements in quantum mechanics. The academic and scientific advances of the past are becoming the real commercialized technology solutions that will change tomorrow.”

ID Quantique’s CEO Grégoire Ribordy said that QWave’s $5.6 million investment would help the company that he founded to expand its commercial activities and penetrate new markets.

Referring to the technical background of various members of the QWave organization, he said: “Serguei and the team at QWave are more than traditional investors. They have a unique combination of business and scientific expertise that makes them an ideal partner for us.”

He continued: “While in the future there will be hundreds of companies using quantum mechanics to make technology smarter, faster, and smaller, today there are only a handful.”

“Having investors with strong physics background and multiple connections in quantum research institutions will help us better navigate the uncharted waters of bringing quantum technology to market, and become leaders in quantum innovation.”

QKD: the basics on Alice, Bob and Eve
For the process of data encryption to work, there must be what is typically referred to as a Rosetta Stone – that is, a secret key to translate the message. Instead of using a complex algorithm to protect the key, QKD uses photons fired through fiber-optic cables.

Those photons have specific properties, such as precise polarization, that enable the sender “Alice” to transmit encrypted information to intended receiver “Bob”. The two can subsequently check the polarization of a random part of the transmitted data to determine whether it has been intercepted.

That is because any attempt to tamper with the quantum encryption by intercepter “Eve” would, according to quantum theory, inevitably disrupt the properties of the individual photons. That would show up in the transmission, meaning that Alice and Bob would know of any attempted eavesdropping.