But the Germany-headquartered optics firm expects sales to rise only 5% in 2013 due to adverse economic conditions. 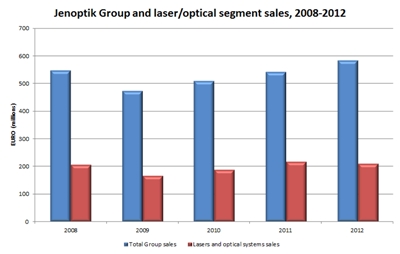 Optics, optoelectronics and laser giant Jenoptik is aiming to increase its sales turnover to €800 million by 2017 – equivalent to more than a billion dollars at current exchange rates.

The company, headquartered in Jena, Germany, has just announced preliminary sales figures of €585 million for 2012, an increase of 8% on the prior year and confirmation of its earlier forecast.

That increase was largely due to a sharp rise in sales from its metrology division, where revenues jumped nearly 30% year-on-year to €180 million thanks in part to robust demand from the automotive sector.

In contrast, Jenoptik’s lasers and optical systems business segment witnessed a 3% sales decline that was brought about by the slump in the semiconductor industry in the second half of 2012.

“In 2012 we were increasingly successful in winning over major customers from the flat-panel, automotive and life sciences industry. This helped us to better offset the falls in business from the semiconductor industry,” said CEO Michael Mertin, also now the chairman of the Photonics21 industry group.

With some potential for a recovery in the semiconductor market later this year but difficult economic conditions lingering, Jenoptik is anticipating relatively modest sales growth of 5% in 2013 – with that growth likely to result from an increased sales presence in Asia and the Americas.

US manufacturing moves to Jupiter
In North America, the company is currently in the process of streamlining its optics manufacturing activity. With its Easthampton, Massachusetts, site expected to close this year, manufacturing will be concentrated in Jupiter, Florida.

In the longer term, Mertin and colleagues are hopeful of achieving annual sales growth in the region of 10%, a rate that would push sales beyond €800 million by 2017.

“We will consistently pursue our long-term strategic agenda,” said the CEO. “With the improved internal processes we are creating the springboard for ourselves to achieve the growth from 2014.”

With good profitability once again in 2012 - expected earnings before interest and taxes (EBIT) of €54 million, compared with €49 million the prior year – Jenoptik is continuing to reduce its debts.

Within the lasers segment specifically, Jenoptik sees the increasing use of the technology in healthcare as a key macro trend, with demand for laser processing systems remaining strong.

Last year, the company won a €10 million order for its medical lasers, and at next week’s SPIE Photonics West trade exhibition in San Francisco Jenoptik will be showing off both its 1 kilowatt fiber laser and an improved version of the JenLas D2.fs femtosecond laser designed for more rapid materials processing as well as medical applications.

Meanwhile, a new Silverline F-Theta silica lens will add to Jenoptik’s portfolio of high-end optics for micro-processing with high-power and picosecond lasers, and the company will also launch its high-definition thermography camera IR-TCM HD 1024 for the US market.