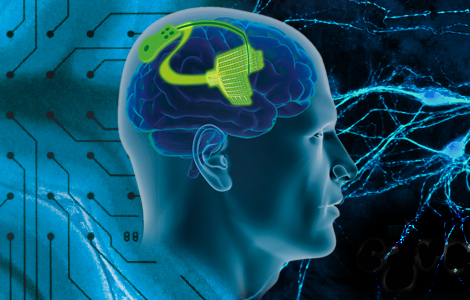 Activating and deactivating individual nerve cells in the brain is something many neuroscientists want to do, as it would help them to better understand how the brain works.

Now scientists in Freiburg and Basel, Switzerland, have developed an implant that can genetically modify specific nerve cells, control them with light stimuli, and measure their electrical activity - all at the same time.

The team says that this novel “3-in-1” tool paves the way for “completely new experiments in neurobiology”, which will also be conducted at Freiburg's new Cluster of Excellence BrainLinks-BrainTools.

Birthe Rubehn and her colleagues from the Department of Microsystems Engineering (IMTEK) and the Bernstein Center of the University of Freiburg as well as the Friedrich Miescher Institute for Biomedical Research in Basel describe the prototype of their implant in the journal Lab On A Chip.

The scientists report that initial experiments in which they implanted prototypes into the brains of mice were successful. The team was able to influence the activity of nerve cells in the brain in a controlled manner by means of laser light pulses. An innovative genetic technique stimulates nerve cells to change their activity by shining light of different colors onto them. 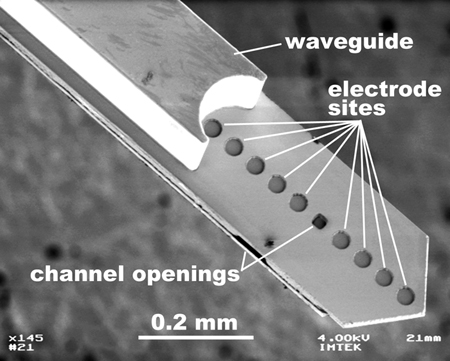 In optogenetics, genes from certain species of algae are inserted into the genome of another organism, for instance a mouse.

The genes lead to the inclusion of light-sensitive pores for electrically charged particles into a nerve cell's membrane. These additional openings allow neuroscientists to control the cells' electrical activity.

However, only the new implant from Freiburg and Basel makes this principle actually practicable. The device, measuring 0.25 x 0.1mm at its tip, is constructed of polymers, which have been shown not to interfere with the nervous system.

Unlike other probes developed so far, the Freiburg/Basel system can inject the substances necessary for genetic modification, while emitting light for the stimulation of the nerve cells, and measuring the effect through various electrical contacts all at once.

The polymer-based neural probe features platinum electrodes for the measurement of electrical signals, an injection channel for fluids (the rectangular openings in the image), and a waveguide for optical stimulation. Besides optimizing the technique for serial production, the scientists want to develop a second version whose injection channel dissolves over time, in order to further reduce the size of the implant.