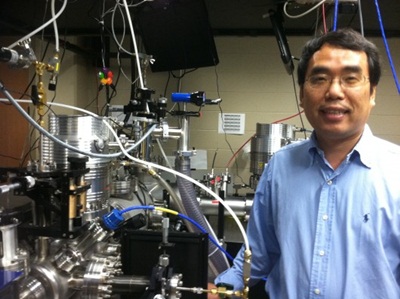 A new tool to watch quantum effects such as the movement of electrons in chemical reactions is closer to being realized, after a Florida research team set a new record for the world’s shortest laser pulse.

Measured at just 67 attoseconds, the mark set by Zenghu Chang and colleagues at the University of Central Florida improves on the previous best of 80 attoseconds, and gets closer to what is regarded as the crucial figure required to “see” electron dynamics and chemical reactions in action.

Chang and colleagues have been able to improve on the previous record, which was set by a group at the Max-Planck Institute for Quantum Optics in Garching that included the ultrashort-pulse pioneer Ferenc Krausz, thanks in part to the use of a new optical technique.

Known as “dual optical gating” (DOG), it concentrates the energy of the pulses of extreme UV light, cutting them off in the shortest time possible. In the latest experiment, near-infrared laser pulses lasting just 7 femtoseconds from a Ti:sapphire amplifier were sent through the DOG optics and focused to a gas cell filled with neon to generate the attosecond bursts of light.

According to the Florida team’s Optics Letters paper, this gas pressure can be adjusted to manipulate the pulse duration, and Chang believes that with longer-wavelength lasers it will ultimately be possible to deliver pulses lasting just 25 attoseconds with DOG – easily short enough to observe chemical reaction dynamics.

“Olympian” race to observe ultrafast phenomena
Commenting on the work Bahaa Saleh, dean of UCF’s world-renowned College of Optics and Photonics (CREOL), said that the new record paved the way towards recording phenomena that it has not previously been possible to view.

“The quest for generating shorter and shorter pulses of light has been ongoing since the invention of the laser more than five decades ago,” Saleh said, returning to the “future photonics” theme of a plenary talk that he gave at the recent SPIE Optics + Photonics conference in San Diego.

“Dr Chang’s advance brings UCF to the forefront of this ‘Olympic’ race and opens up new frontiers for seeing and recording ultrafast dynamic atomic phenomena."

Chang added that aside from the implementation of DOG, his team’s approach also differed from that taken by the Max Planck team in its use of two methods to characterize the attosecond pulses, whose durations were measured using a streak camera.

One method, known as “FROG-CRAB”, is similar to what was used at Max-Planck, he explained. The second method is “phase retrieval by omega oscillation filtering” (PROOF), which the UCF team developed. “Whereas both methods work fine for the current 67 attosecond pulses, PROOF is capable of measuring even shorter pulses,” Chang said. “Both aspects are important for further reduction of the attosecond pulses in the future.”

While Chang and colleagues are seeking to further shorten the already remarkable pulse duration, their priority is now to increase the energy of the attosecond pulses. “At the present time, isolated attosecond pulses are so weak [on the order of nanojoules] that we have to combine [them] with strong femtosecond lasers to observe electron dynamics,” said the UCF professor.

“Our DOG can be driven by multi-cycle high energy (Joule-level) lasers, which makes it possible to generate isolated attosecond pulses that are intense enough for conducting true attosecond pump-attosecond probe experiments,” he added.

And while electron dynamics have already been observed in molecules – by the UCF team among others - Chang thinks that much more will be possible soon. “Observation [of] chemical reactions with attosecond resolution is still a dream that [can] become true in five years,” predicted the researcher.