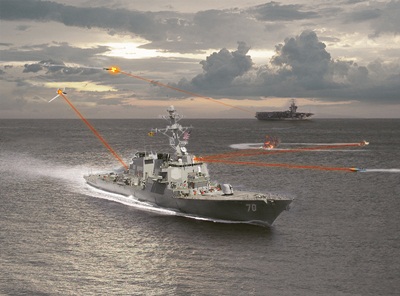 A 100 kW laser weapon could be used on board a US Navy ship by 2016, according to a document outlining a $110 million plan to further develop such “directed energy” systems.

The new broad area announcement (BAA) from the US Navy’s research and development arm is calling for the rapid development and demonstration of a ship-based solid-state laser weapon.

Issued by the Office for Naval Research (ONR) Naval Air and Weapons Department on August 14, the document states that the goal of the program includes “demonstrating technical maturity of the solid-state laser weapon system against relevant surface and air targets, in realistic encounters including representative ranges from the ship to the target, while at sea and firing through a representative maritime environment”.

More specifically, the BAA document adds, this means building and testing a prototype laser weapon, off-shore, at sea and on a ship moving at combat speeds and in “combat like” conditions, engaging in live fire exercises.

The US Navy has identified two ship classes – the Arleigh Burke Destroyer (DDG-51) and the Littoral Combat Ship – as primary candidates for initial shipboard installation, which are likely to follow extensive at-sea tests on other boats as the systems are developed.

Four-phase approach
The BAA describes a development program that will evolve in four phases. Phase I, which is likely to include four separate $1.5 million firm-fixed-price contracts and is slated for fiscal year 2013, will be focused on conceptual designs.

Phase II will provide for more detailed design and development work in FY2014, with a maximum two systems going forward to the prototype stage. Phase III, running between FY2014 and FY2016, will involve manufacturing, assembly and testing of the solid-state laser weapon(s) and finally Phase IV will see deployment in a US Navy “program of record” overseen by the Naval Sea Systems Command (NAVSEA).

The BAA follows on from a pre-proposal conference and industry day that was hosted by ONR earlier this summer, and full proposals from interested parties are due October 16. Phase I contract awards will be made 4-6 months later, assuming that the project funding does not fall foul of the automatic “sequestration” of the Department of Defense budget at the end of the year.

The project document highlights the ONR’s desired approach to use a “modular open systems approach” (MOSA) and architecture, under which multiple vendors may supply subsystems that connect through combinations of military and open industry standard hardware and software.

“Therefore, subsystems may be developed in parallel, by multiple contractors and be interchangeable between the prototypes as they are tested,” the BAA states.

RELI and Excalibur
Of particular interest to the ONR project, the BAA adds, are the existing solid-state laser weapons already being developed through the robust electric laser initiative (RELI). In 2010, the US Army awarded contracts to teams led by Raytheon, Northrop Grumman and Lockheed Martin under RELI. 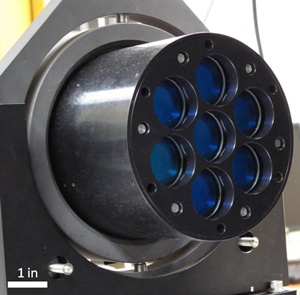 Raytheon recently said that it was on track to meet the demonstration milestones for the “base phase” of RELI with its master-oscillator power amplifier (MOPA), adding that the optical part of a 30 kW laser design concept featuring a singlemode 1030 nm fiber laser oscillator, amplified by a Yb:YAG planar waveguide, should weigh less than 200 kg.

One of ONR’s stated goals is for the solid-state laser weapon to function for long periods in the maritime environment without the need for support personnel or extensive engineering while in stored configuration.

“It has been stated that there would be no requirement for ship’s personnel to adjust, clean or examine either interior or exterior optics in the entire laser weapon system,” says the BAA document.

“Health monitoring of the optical train for a high-power laser beam path shall be considered a critical review item, as well as having unattended operations for verification and cleaning of external apertures.”

ONR lists a number of optical technologies that are of particular interest regarding the functionality and robustness of the overall laser weapon system. They include optical coatings that are resistant to both high laser energies and salt water, beam combiners to scale the laser output from 25 kW to a maximum of 150 kW, and adaptive optics hardware for wavefront correction.

The adaptive optics element is seen as critical for maritime lasers. The spatial quality of the high-power beam must be maintained at a very high level to ensure that the weapon will be effective at large stand-off distances, and the maritime environment poses particular challenges in the form of high humidity, sea-spray, fog and constant motion.

Later this month, SPIE Europe's Security + Defence event in Edinburgh, UK, will feature a conference dedicated to high-power laser weapons for the first time. Among the speakers will be Mark Neice, director of the US High Energy Laser Joint Technology Office (plenary session), Robert Pawlak from the US Navy, and Robert Afzal from Lockheed Martin Aculight, who will describe the company's efforts under the RELI program.