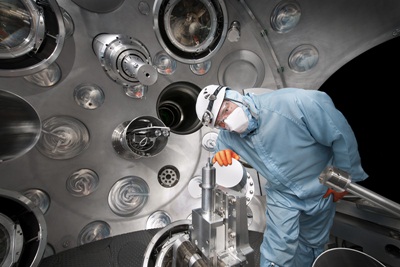 by Andy Extance
The UK's Atomic Weapons Establishment (AWE) is scheduling in research at its giant neodymium glass laser system, called Orion, at Aldermaston ahead of its opening next year.

Currently, all of the £183 million ($297 million) facility’s twelve beamlines have been synchronized and are at 80 per cent of their nominal output. “It is likely that Orion will be fully operational in April 2013,” said Andrew Randewich, head of plasma physics at AWE.

Orion will then begin its routine high energy density physics experiments, intended to support the certification of the UK deterrent’s performance and safety. To do this, it replicates the physical environment at the heart of a nuclear detonation fleetingly, on a minute scale, in the laboratory.

It’s designed to achieve temperatures around 5 million Kelvin, where the target collapses to twice its solid density. “These conditions are typically found in the center of stars and without facilities like Orion, it is impossible to understand them,” Randewich said.

AWE is currently in the process of demonstrating this capability, and aims to do so by March 2013. In parallel, it is deploying many diagnostics designed to monitor X-ray, particle and optical emissions from the target.

The UK’s academic community is also set to benefit from the facility, as the Ministry of Defence has allowed AWE to dedicate 15 per cent of Orion’s system time for external use. A recent call for proposals, managed through the UK’s Central Laser Facility, saw submissions covering astrophysics, inertial confinement fusion and the study of materials under multi-megabar pressures. AWE is currently in the process of scheduling two of these experimental campaigns for late 2013.

Unique arrangement
Orion brings together long-pulse and short-pulse lasers in an arrangement that AWE says is unique. Its ten long-pulse beamlines deliver 5 kJ at 351 nm in nanosecond pulses, with precision shaping capabilities.

Its two ultra-high intensity short-pulse beams each provide petawatt performance at 1053 nm for picosecond durations that can also each be delivered onto an approximately diffraction-limited spot size. One can be converted to deliver 100 J at 527 nm to generate ultra-high contrast. The lasers all converge in a target chamber surrounded by 1.5 m-thick concrete walls.

“These can be used in versatile configurations to generate extreme conditions and, equally importantly, to diagnose the conditions generated and the evolution of the plasma,” Randewich explained. Each laser’s performance at its target, as well as the ability to synchronize them, was demonstrated at the end of the ‘construction’ phase in December 2010. 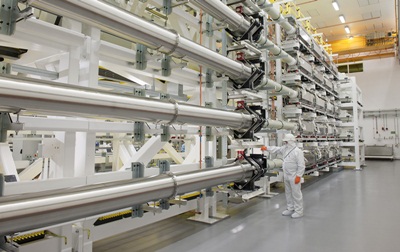 AWE calls Orion “one of the largest capital investments of its kind in the UK”, which is in part down to its mostly purpose-built hardware and software. “The completed facility is the culmination of thousands of components being combined and working as an integrated system,” Randewich said.

“Many of the optics used are ultra-high precision and only available from specialist suppliers in the UK, France and the US. One unique component is the frequency doubling crystal used to convert one of the short-pulse beamlines. This is 300 mm in diameter but can only be 3 mm thick to get high conversion efficiency because of the high intensity of the pulse.”