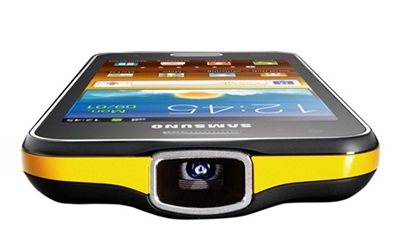 Swiss-headquartered STMicroelectronics, rated as the world’s leading maker of micro-electro-mechanical systems (MEMS) components, has taken a major step into the emerging market for pico-projectors following a deal with the Israeli start-up bTendo.

Venture-backed bTendo is one of a number of companies developing the tiny laser-based projectors, which can be integrated within consumer electronics devices such as smart phones, digital cameras and notebook PCs.

As well as enabling those devices to project high-resolution images of games, videos and photos onto a nearby surface, they promise to create a substantial new market for photonic components including laser diodes and collimating lenses.

ST and bTendo have been collaborating closely on technology development since February 2011, but now the semiconductor giant has taken that relationship to a new level. Alongside Samsung’s recent launch of the new “Galaxy Beam” smart phone, one of the first to incorporate a pico-projector, the move supports industry analyst forecasts that the market could be one of the fastest-growing opportunities in photonics over the next few years.

“Following a successful joint development effort with start-up bTendo, ST has acquired the intellectual property and hired most of the staff of the Israeli company to accelerate the propagation of the technology,” said STMicroelectronics in a statement.

Samples of the jointly developed technology, which is based around bTendo’s scanning red/green/blue laser projection “engine” and ST’s MEMS components, are now said to be in the hands of potential customers.

Samsung launched its “Galaxy Beam” smart phone in the UK on July 31, having first announced the product at the Mobile World Congress trade show back in February.

The Galaxy Beam is 12.5 mm thick, with Samsung’s VP for UK and Ireland’s Telecommunications and Networks Division saying: “It’s the kind of device you won’t find anywhere else – a high definition projector within a standard sized smart phone.”

Samsung has described the public response to its launch of the projector phone as “hugely positive”, lending support to a recent forecast by the industry analyst firm Pacific Media Associates. It predicts that the market for pico- projectors will grow at a remarkable 80% compound annual rate over the next few years, to reach 58 million units by 2015. In 2011, the market amounted to only 3 million units.

Green laser developments
One of the key reasons why the market development has been held up until now is the difficulty in manufacturing direct-emitting green laser diodes. This has meant that designs have been restricted to bulkier, less efficient and power-sapping frequency-doubled infrared lasers to complement the commonplace red and blue laser diodes and produce a full-color image.

But that situation is now beginning to change. In June, the Japanese duo of Sony and Sumitomo Electric Industries – who were instrumental in the early production of the blue diode lasers that featured in Blu-ray Disc players - announced that they had developed a direct-emitting green semiconductor laser with an output in excess of 100 mW at 530 nm.

“The new laser diode features twice the luminosity compared with conventional gallium nitride (GaN) green laser diodes, and a color gamut broadened by 182% based on the NTSC standard (CIE 1976 color gamut),” said Sony. “As a result, these significantly improve the performance of laser projectors and other display devices to reproduce vibrant video and images.”

The newly developed laser relies on a semiconductor structure that is grown on top of a so-called semi-polar GaN crystal substrate. The semi-polar plane of a GaN crystal is tilted at 75 degrees to the conventional c-plane of the material used in blue lasers, and improves the light-emitting characteristics of the device, reducing the laser’s operating current and voltage and helping to improve efficiency.

“This true green semiconductor laser diode is highly reliable as it realizes wall-plug efficiency of over 8%,” Sony added.

bTendo’s optical design
According to STMicroelectronics, the bTendo technology represents the smallest and most efficient projector yet to become available in the market – meaning that it will fit inside even the slimmest devices.

In the bTendo optical design, each of the red, green and blue laser diodes is accompanied by a circularization lens and a collimation lens. The three emitted beams are initially circularized, then collimated according to the required beam parameters and projected towards the beam-forming subsystem.

This subsystem uses what bTendo calls a unique optical design to combine the three modulated light sources into a single red/green/blue light beam that is then directed towards the key part of the company’s design - the spatial modulator.

The modulator comprises a pair of uniaxial, MEMS-based scanning micromirrors that reflect the combined light beam. These scan in both horizontal and vertical directions, yielding a pixel-by-pixel generation of a focus-free high-definition image projected onto the closest available surface.

Formerly known as “TeraOp Displays”, bTendo was started up by a team of Israeli high-tech entrepreneurs back in 2006, and raised $7 million in venture capital funding from Carmel Ventures and BlueRun Ventures shortly afterwards.