The PULSE program is soliciting proposals for novel ultrafast laser development across a broad front. 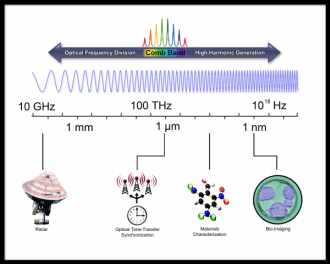 DARPA, the US Defense Advanced Research Projects Agency, has announced the creation of its Program in Ultrafast Laser Science and Engineering (PULSE). The program is intended to develop novel ultrafast sources of radiation that can offer improvements over existing technologies in terms of performance, size, weight and power.

This far-reaching approach is described in DARPA's announcement as a vision to "generate and control ultrafast pulses of light for synchronization, metrology, and communications, spanning from the microwave to the X-ray domain. PULSE seeks to enable efficient and agile use of the entire electromagnetic spectrum by linking it to the output of an ultrafast laser."

The stated goal is to tackle the practical difficulties that have until now kept certain laser-based technologies restricted to the laboratory, and do so through input from researchers across a wide spectrum of disciplines.

"PULSE is a basic research program initially focused on component technology," commented Jamil Abo-Shaeer, DARPA program manager for PULSE. "Our primary concern isn’t demonstrating a specific application, but rather making these tools a reality at a practical scale by overcoming current obstacles like size and thermal management. The range of potential applications is enormous. Literally any technology that uses electromagnetic radiation could be impacted."

Future resources
In defining the PULSE terms of reference, DARPA has focused in particular on four DoD-relevant areas in which the agency anticipates investing its resources in the future, and from which defense applications can readily be developed:

• Portable frequency-comb-based devices, in which the laser's output spectrum consists of a series of discrete, equally spaced elements. Waves in the optical domain from such sources can be down- or up-converted to a desired wavelength, including the conversion of an ultra-stable optical reference to a low phase-noise microwave source. DoD applications for these microwave sources include secure communications and the detection of explosives.

• Laser-driven secondary radiation. The development of efficient tabletop, laser-driven sources of secondary radiation could then lead to coherent 3D X-ray imaging systems operating in the "water window" of 2.3 to 4.4 nm, wavelengths that nitrogen and other elements absorb but water does not. DARPA's goal is a system with resolution better than 5 nm, for the imaging of subcellular structures.

• Attosecond science. Using a source capable of delivering microjoule levels of energy in pulses approaching 10 attoseconds as both the pump and probe trains in pump-probe spectroscopy could deliver sufficient resolution to resolve the electron dynamics underway in condensed matter and plasmas.

The PULSE program will run for a total of five years, including an initial proof-of-concept phase; component integration and laboratory demonstrations; and eventual demonstration in an operating environment. The exact funding levels available have not yet been released.

Further details can be found on the US Government Federal Business Opportunities web site.