After a successful landing, the mission's laser-based analysis instruments can commence their work. 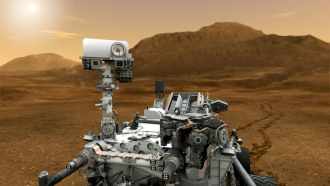 The Mars Science Laboratory space-probe successfully delivered the Curiosity rover onto the surface of Mars as scheduled on August 6th 2012, and all being well the exploration vehicle will soon be about its business.

Curiosity's agenda includes the use of photonics technology to analyze the constituents of Martian soil and surrounding rocks, by characterizing samples physically brought into the rover's on-board instruments and also remotely examining selected areas of the surrounding landscape up to seven meters away.

The key instrument for carrying out the latter operation is ChemCam, a laser characterization system that should be among the first of Curiosity's instruments to power-up and begin its remote sensing duties. Mission specialists anticipate that ChemCam will begin its calibration procedures on or around August 10th 2012, and make its first analyses of the surface between August 17th and 18th.

"ChemCam is designed to look for lighter elements such as carbon, nitrogen, and oxygen, all of which are crucial for life," said Roger Wiens, principal investigator of the ChemCam team, speaking before the landing. "The system can provide immediate, unambiguous detection of water from frost or other sources on the surface, as well as of carbon, a basic building block and possible byproduct of life. This makes the ChemCam a vital component of Curiosity’s mission."

ChemCam is based on the use of a laser-induced breakdown spectroscopy (LIBS) instrument, the first use of LIBS for planetary science after the technique has proven its worth in extreme Earth-bound environments, such as the inside of nuclear reactors and on the sea floor.

The LIBS instrument on Curiosity will focus laser pulses of approximately 14 mJ power and 5 nanosecond duration onto areas of rock between 0.3 and 0.6 mm in diameter, typically at a rate of three pulses per second. The resulting power density, greater than 10 MW/mm2, is enough to ablate atoms and ions from the Martian material in electronically excited states. Recording the spectra that this plasma plume duly emits will yield information about the chemical composition of the rock.

It is anticipated that 50 to 75 individual laser pulses will be required to achieve the desired detection accuracy at seven meters distance, exploiting the ability of LIBS to remove dust and weathering layers with repeated laser pulses trained on the same spot. ChemCam has been designed to capture up to 14,000 observations throughout the mission.

Landing site
ChemCam will employed at each location Curiosity visits, but will begin its work at the Gale crater site where the rover has landed. "The amazing thing about the mountain in Gale crater is that it appears from orbit to be entirely sedimentary material," said Nina Lanza, a post-doctoral researcher at Los Alamos National Laboratory (LANL). "This is a collection of sedimentary layers that is nearly three times higher than the Grand Canyon is deep." 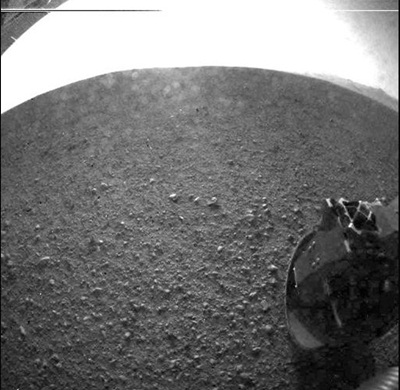 LANL supplied ChemCam's spectrometers and data processors, and leads the overall investigation. CNES, the French national space agency, along with the CESR astrophysics laboratory in Toulouse provided ChemCam's laser and telescope, with the laser itself being built by Thales.

Other photonics instruments on board Curiosity include a pair of two-megapixel color cameras on the rover’s mast; a focusable color camera on the tool-bearing turret at the end of Curiosity’s robotic arm; and a tunable laser spectrometer within the Sample Analysis at Mars (SAM) instrument.

SAM employs the spectrometer alongside a gas chromatograph and a quadrupole mass spectrometer to investigate the chemical and isotopic composition of the Martian atmosphere, as well as volatiles extracted from powdered solid surface samples brought into the vehicle. This should allow a sensitive search for methane, carbon dioxide and water vapor, and measure the isotopic composition of carbonaceous Martian material.