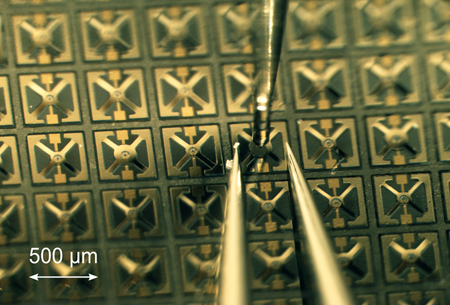 The novel lasers may be readily integrated into telecommunications systems.

Scientists at the Techincal University Darmstadt, Germany, working in collaboration with their partners under the EU’s “Subtune” project, have developed semiconductor lasers that emit light over a wavelength range of 100 nm, a new world record for a single semiconductor laser. Such lasers might allow more efficient, lower-cost operation of future fiber optic telecommunications networks and the development of high-responsivity gas sensors.

Surface-emitting semiconductor lasers emit light at a right angle to the plane of the semiconducting wafer on which they have been fabricated. They require very little power for their operation and are thus utilized as light sources on, for example, computer mice and laser printers. Christian Gierl and Karolina Zogal of the TU‑Darmstadt’s Institute for Microwave Technology and Photonics have recently significantly extended the tunabilities of such lasers.

Their approach involves taking advantage of yet another benefit of surface-emitting semiconductor lasers, namely, their very large resonator-length/emitting-area ratios, which greatly increases the spacings of their emitted wavelengths. Their broad free spectral range allows tuning the wavelength of their strongest emission line over a broad range, i.e., converting them into transmitters whose output may be set to any wavelength falling within a certain, broad range, just as radio transmitters may be tuned to various frequencies/wavelengths.

Under the EU’s “Subtune” project, Gierl, a physicist, and Zogal, a materials scientist, managed to tune the wavelength of the output beam of a semiconductor laser provided by one of their Subtune partners, the Walter Schottky Institute at the TU‑München, over a range of more than 100 nm, the broadest tuning range thus far achieved by any semiconductor laser, while retaining its other, excellent, emission characteris­tics, such as its high output power and high spectral purity.

In order to achieve that broad tunability, they applied to its emitting surface a flexible membrane having a reflectance exceeding 99 % at its lasing wavelengths that served as its output mirror, and whose flexing could be externally controlled. Every laser is equipped with a pair of facing mirrors that reflect light back and forth in order that it will be amplified by the laser’s active medium on each pass. The spacing of its mirrors determines which wavelengths from the amplified range will be emitted. The TU‑Darmstadt duo’s new lasers allow accurately varying that spacing at will and smoothly tuning laser output wavelength over a broad range.

In addition to having developed a fundamentally new technology, the TU‑Darmstadt duo has provided that the transfer of that technology to practical applications will proceed without a hitch. Their lasers are tunable over a range centered on 1550 nm, the wavelength commonly utilized by fiberoptic telecommunications systems. They have also developed the world’s first tunable laser covering a range centered on 2.0 µm.

Gierl explained that, “The telecommunications industry is extremely interested in this technology because in the future it will need to service households via fiberoptic networks operating at various wavelengths.” If there were no tunable lasers, a special type of semiconductor laser would have to be fabricated for each wavelength to be involved.

“Tunable lasers obviate that necessity, since only a single type of laser will have to be fabricated.” The wavelength range centered on 2.0 µm is of particular interest to sensors for detecting the presence of gases, since it falls within the range where the vibrational modes of molecules, such as carbon dioxide, are excited. Gases may be identified and their concentrations determined by means of precision measurements of the wavelengths at which they absorb radiation and the absorption coefficients occurring at those wavelengths.

“Since that absorption is very strong, gas sensors based on our technology have high responsivities, in addition to being extremely compact and highly energy-efficient.” Thanks to their tunability, here again, a single laser will be sufficient for detecting various gases. 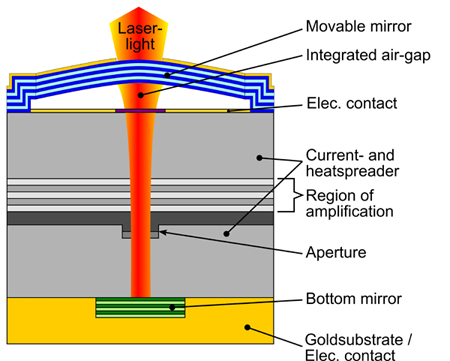 Fabrication is 'easy' According to the research duo, yet another benefit of its new lasers is that they are easy to fabricate. As Gierl put it, “Although the method we employ for applying the membrane directly to the laser is new, we utilized methods that have become well-established in the semiconductor industry for that purpose.”

The method involved is microphotolithography, a sort of engraving technique employed for fabricating microchips that allows generating structures having dimensions of the order of a few micrometers. Gierl went on to say that, “We are able to fabricate chips having numerous, tunable, surface emitters that meet all of the requirements for the particular applications involved.”

A follow-on project is intended to close the remaining gaps in such chips’ readiness for utilization in practical applications. Closing one of those gaps involves providing that their output may be modulated at high frequencies in order that data may be transmitted at high transfer rates.

The team is also planning to incorporate its chips into modules similar to USB‑sticks that may be readily integrated into telecommunications systems. They are already collaborating with the Lawrence Livermore National Laboratory, Livermore, California, and Leister Technologies AG, Kaegiswil, Switzerland, on improving their gas sensors. Furthermore, their new lasers have already been successfully tested on a communications network at Subtune partner the Tyndall National Institute, in Cork, Ireland.