However, road ahead 'diverges sharply' depending on technology and geography. 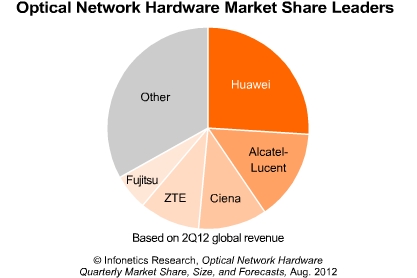 Andrew Schmitt, principal analyst for optical at Infonetics Research, commented, "The optical hardware market outlook looks decidedly different depending on which market you sell into

"While spending on WDM is reasonably healthy, SONET/SDH is sailing off a cliff. Vendors who have good WDM products but large exposure to SONET/SDH are struggling to replace lost revenue fast enough to show growth."

He added, “Asia Pacific achieved a big increase in the second quarter, with large seasonal gains by Huawei and ZTE. Despite tepid growth in the first half of 2012, we expect significant growth in optical spending in China, where ZTE continues to take market share from Huawei.”

The global optical network equipment market —WDM and SONET/SDH—grew 15% in 2Q12 from the previous quarter, but is down 10% from the year-ago second quarter;

Huawei expanded its lead in the global optical network hardware market in 2Q12; Alcatel-Lucent held onto the #2 spot (optical revenue up 5%); and Ciena posted its strongest quarter on record, easily maintaining 3rd overall and edging into 2nd in the WDM segment

WDM accounts for 80% of all optical spending in North America

in Europe, the Middle East, and Africa optical equipment revenue was up sharply in 2Q12, but still down year-over-year; spending growth on WDM equipment outpaced SDH, a positive indicator for these regions

Matthew peach is a contributing editor to optics.org