New approvals in China and Japan, coupled with large-scale project completions in the US, take up the slack from a European slowdown. 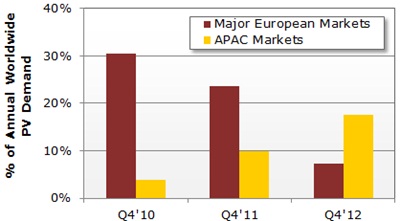 Global demand for photovoltaics (PV) is set to accelerate in the second half of 2012, in spite of a rapid slowdown in Europe as financial incentives are phased out, and the ongoing impact of trade disputes.

That’s according to the latest analyses by IMS Research and NPD Solarbuzz, along with new figures from the Japan Photovoltaic Energy Association that show a very sharp increase in sales of solar cells in the country as it diversifies away from nuclear energy.

In its latest report on the Asian PV market, Solarbuzz highlights how global demand will undergo a sudden geographic switch in the second half of this year - particularly in the closing quarter.

The analyst firm’s historical figures show that sales in major European markets – Germany and Italy – in the fourth quarter accounted for 30% of annual worldwide PV demand in 2010, and 23% in 2011. That compression of demand into the closing quarter of the year was the result of customers rushing to install PV before the scheduled reductions in financial support mechanisms each January.

According to Wolfgang Schlichting, research director at Solarbuzz, that rush of year-end demand in 2012 will no longer be dominated by Europe, but by the Asia-Pacific (APAC) region.

“Strong growth in APAC and other emerging PV markets is providing new impetus,” the analyst says. “However, in established PV markets, the short-term business environment will remain challenging for the remainder of 2012, with continued reductions in incentive policies and uncertainties due to the ongoing trade disputes.”

Strong year so far (despite everything)
Despite those disputes, an industry shake-out and the apparent inability of any PV firms to make a profit, growth in all major regions so far this year has actually been very strong, including in Europe. In APAC, second-quarter demand reached 1.4 GW (up 60% year-on-year), with China’s investment in “Golden Sun PV” projects accounting for 0.6 GW of that total. But Europe still proved to be a strong market ahead of those incentive cuts, with 8.5 GW installed.

The level of demand in China is set to continue on a rapid growth trajectory this year, with IMS Research analyst Ash Sharma pointing out that another 1.7 GW of Golden Sun projects in the country will be completed by the end of the year.

It isn’t just about China though. In Japan, where a new feed-in-tariff mechanism became effective on July 1, Sharma is predicting a “surge in demand towards the end of 2012”. That optimism is backed up by some new figures from the Japan Photovoltaic Energy Association quoted by Reuters.

They show that sales of solar cells in Japan reached 445 MW in the second quarter, up 72% from the same period of 2011 – though that was immediately following the March 11 tsunami and subsequent Fukushima incident.

“Potentially massive demand”
Schlichting’s Solarbuzz report concurs, with the analyst reporting: “The new Japanese FIT program is now setting up Q4 2012 as a quarter of potentially massive PV demand pull across the APAC region.” He thinks that more than half of the year’s APAC demand will be squeezed into the closing quarter of the year – much as has happened in Europe in recent years – with 5.3 GW set to be installed.

Sharma’s latest report for IMS Research also shows the rapid growth of the US market, as large-scale projects agreed over the past few years are completed. The analyst says that the US is likely to add “at least” 3.5 GW in PV capacity this year, becoming the world’s third-ranked PV market in the process (Solarbuzz ranked the US in fourth place for 2011).

Figures for the Americas market overall, which is dominated by US installations, showed growth of 120% in the first half of the year, with 1.7 GW added. For exactly how long that momentum can be maintained in the US is unclear, however. “IMS Research remains optimistic about the potential for the US PV market,” stated Sharma, with the caveat: “The longer-term outlook for this market is less certain, although the speed at which it is developing so far in 2012 provides some encouragement.”

2012 forecast raised
Thanks largely to the impetus from Asia, it now looks like 2012 will be another "up" year for the global PV market - at least in terms of installations. “Despite the lackluster financial performance of the industry’s suppliers, underlying demand was robust in the first six months of the year, with first-half installations up 35% on 2011,” Sharma added. “The Americas market was unseasonably strong in the first half and did not show any significant slowdown resulting from the anti-dumping duties.”

That 35% figure relates to global PV installations, which Sharma estimates to have exceeded 13 GW for the first time in the opening half of the year. The analyst says that in the second half of 2012, the growth from Asia will outweigh the sharp slowdowns expected in German and Italy.

As a result, Sharma predicts that 18 GW will be installed in the second half, pushing the annual total above 30 GW for the first time. According to the same analyst, global PV installations in 2011 had reached a record 26.9 GW.

Earlier this year, Sharma was less optimistic, forecasting that 2012 would register only a modest increase in global demand. Solarbuzz had been even more bearish, predicting that the market might even shrink for the first time.

But the acceleration of plans in China and elsewhere suggest that once again the PV market will provide unexpectedly strong year-on-year growth.