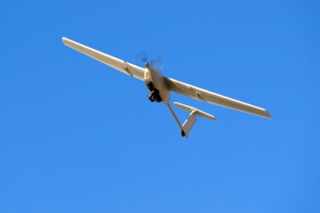 Wireless power transmission, a notion whose principles were pondered by Nikola Tesla and Arthur C. Clarke amongst others, may soon be put to practical use as a means to extend the flying time of unmanned aerial vehicles (UAVs).

A demonstration of "laser power beaming" by Lockheed Martin and LaserMotive has proved that a laser situated on the ground could act as an energy source for an operational UAV in flight, and recharge its on-board power cells.

In an indoor flight test held in a wind tunnel, the companies used a laser to extend the flight time of a modified Lockheed Martin Stalker UAV to more than 48 hours. The Stalker's conventional on-board power supply normally delivers a working life of nearer two hours.

The test was concluded after two days only because the flight had already surpassed the initial endurance goals set by the team, rather than because of any operational limits. Subsequent examination showed that the on-board battery had more energy stored at the end of the trail than it did at the beginning.

"This test is one of the final steps in bringing laser-powered flight to the field," said Tom Nugent, president and co-founder of LaserMotive. "By enabling in-flight recharging, this system will ultimately extend capabilities, improve endurance and enable new missions for electric aircraft. The next step in proving the reality of this technology is to demonstrate it outdoors in an extended flight of the Stalker."

A feasible technology
Seattle-based LaserMotive was founded in 2007, initially with a view to entering the NASA Power Beaming Challenge and creating a laser-powered robot able to climb 1 km of vertical cable at speed. After winning the 2009 competition and its associated $900,000 prize, the company has continued towards the goal of commercializing wireless power delivery for several potential applications, UAVs being only one.

"Until recently the power and cost of the laser diodes necessary for power beaming have been key barriers to the practical application of the technology," commented Nugent in a technology briefing. "However, with recent advances in laser technology, diodes are becoming powerful, efficient, and inexpensive enough to make the commercial development of the technology feasible."

Critical parameters for UAV applications include include both specific power (W/kg) and energy density (J/kg). Although exact laser specifications for the UAV trial have not been released, LaserMotive has previously demonstrated power beaming systems with a receiver-specific power as high as 800 W/kg. By comparison, the lithium-ion batteries in small UAVs are generally used with a specific power in the range of 200 to 500 W/kg.

There is still room for improvement. The main factor affecting the efficiency of the overall power delivery process is whether the receiver collects all of the transmitted light. As a result, a primary area for further component R&D is the on-board photovoltaic cells onto which the laser shines.

"The vast bulk of PV cell development has been aimed at improving efficiency and/or lowering costs for solar cells, which must convert broad-spectrum light from a thermal source," said Nugent. "Efforts to optimize laser cells suitable for power beaming have been more limited. At least a basic review of PV technology is urgently needed, ideally leading to a development effort similar to the recent DARPA SHEDS program, which succeeded in radically improving the efficiency of high-power semiconductor diode lasers."