After $370 million in investment – partly through a DOE loan guarantee – the thin-film CdTe module maker files for bankruptcy. 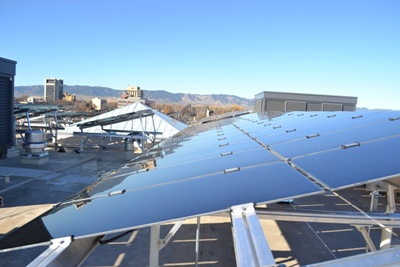 In its July 2 filing with the Delaware bankruptcy court, Abound’s voluntary petition included a list comprising hundreds of creditors and estimated liabilities of at least $100 million. As with Konarka Technologies last month, the “chapter 7” nature of the filing requires the company to suspend operations – with some 125 employees directly affected.

Earlier this year, Abound stopped making its first-generation PV module and has since been working to scale up a higher-efficiency product. The second-generation module had been tested and verified by the National Renewable Energy Laboratory (NREL) to deliver 85 W per panel at an efficiency of 12.5 percent, but that technical progress was not enough to make the company’s technology competitive with cheaper silicon panels.

The company says that it has been in discussions with potential buyers over the last several months, but those negotiations ended when the parties involved were unable to come to an agreement on terms.

Tariffs came too late
Like many before it, Abound’s management pointed the finger of blame at cheap Chinese imports of crystalline silicon PV modules, adding: “Abound supports recent initiatives to enforce fair trade with import tariffs, but this action is unfortunately too late for the company.”

Since its inception in 2007 – originally as “AVA Solar”, and with technology based on a physical vapor deposition method for making thin-film cells initially developed by founder W.S. Sampath at Colorado State University starting in 1991 - Abound had attracted some $300 million in private equity capital.

In 2010, it had also agreed a $400 million loan guarantee with the US Department of Energy – from the same program that came in for major criticism following the demise of the now-infamous Solyndra last year.

But unlike Solyndra, Abound did not draw down all of that guarantee – the draw-down was deemed too risky and halted at $70 million by DOE officials in August 2011 following the Solyndra scandal, and while the price of competing technologies imported from China continued to plunge.

The company had been hoping to expand the capacity of its Tipton, Indiana, manufacturing plant to 840 MW by 2014, but those ambitious plans now look all but scuppered.

“Abound believes that, at scale, its USA-made CdTe panel technology has the ability to achieve lower cost per watt than competing crystalline silicon technology made in China,” stated the company in its release on the bankruptcy filing. “However, aggressive pricing actions from Chinese solar panel companies have made it very difficult for an early stage startup company like Abound to scale in current market conditions.”

“According to the Commerce Department, the US solar market has seen the prices for panels drop by more than 50 percent in the past year, at a time when the value of imports of Chinese-made solar cells nearly quadrupled from $639 million in 2009 to $3.1 billion in 2011.”

GE rumors circle
Abound’s employees may have held out hope for similar jobs at nearby GE Solar. But according to an unconfirmed report from Forbes, GE Solar has put the build-out of its own thin-film CdTe plant on hold*, and is terminating employees associated with the construction with 60 days’ notice - although it appears that jobs may still be available on the non-construction side.

Last year, GE said that the new 400 MW panel fab in Aurora, near Denver, would ultimately create 355 jobs. Its particular variation of the thin-film CdTe technology was initially developed at NREL, before being transferred to start-up PrimeStar – which GE first bought a majority stake in before full acquisition last year.

Abound has set a date for a meeting of its creditors, which will take place in Wilmington, Delaware, on August 1 at 1pm.

* Update: GE clarified that, given the current solar industry dynamics, it is putting the CdTe plant build-out on hold for "at least 18 months" while it focuses on developing a second-generation module with a higher efficiency.