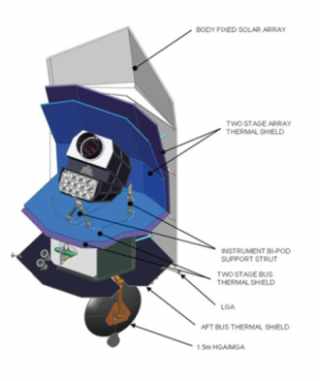 A proposed space mission to launch an infrared telescope into orbit around the Sun will allow the inner solar system to be mapped in unprecedented detail, and potentially identify those asteroids whose course could pose the threat of impact with the Earth.

Announced at the California Academy of Sciences, the Sentinel telescope will also represent the first privately funded deep-space mission. It is being backed by the B612 Foundation, a group established in 2002 and dedicated to investigating means to protect the Earth from asteroid strikes.

"The B612 Sentinel mission extends the emerging commercial spaceflight industry into deep space, a first that will pave the way for many other ventures," commented Scott Hubbard, B612 Foundation Program Architect and former Director of NASA Ames Research Center, at the announcement.

The B612 Foundation is working on the project with Ball Aerospace & Technologies, Colorado, which was a major contractor to the earlier Kepler and Spitzer telescopes. B612 characterizes Sentinel as building on these flight-proven heritage instruments, similarly employing a large format camera made up of many individual detectors and a cryogenically cooled instrument.

The intention is that by detecting and tracking nearly all of the Near-Earth Objects greater than 50 meters in diameter, Sentinel will create a map of the solar system in Earth’s neighborhood for future robotic and manned exploration. The Sentinel data will also identify objects that are on potentially hazardous trajectories, providing an early warning of impact.

At present the preliminary spacecraft and mission design are complete and a firm fixed-price proposal has been submitted by Ball Aerospace, partly enabled by early infrared detector work funded by B612. It will take approximately five years to complete development and testing, to be ready for launch in 2017 or 2018. The launch vehicle of choice is the SpaceX Falcon9.

Vantage point
Sentinel will be a space-based infrared telescope with a mirror 50 cm in diameter. The proposed design features cooled HgCdTe detectors capable of scanning wavelengths from 5 to 10.4 microns. The result should be infrared images of 24 million pixel resolution, captured in an 11° field of view, and Sentinel's designers believe it will be able to survey 165 square degrees per hour.

The telescope is intended to be placed into orbit around the Sun at a distance of 0.6 to 0.8 astronomical units, roughly the same distance as Venus, and to operate there for the 5.5 years required to complete its survey.

"This position will provide the optimal vantage point to map the locations and trajectories of Earth-crossing asteroids," said Harold Reitsema, Sentinel Mission Director. "Sentinel will scan the entire night half of the sky every 26 days, to identify every moving object with repeated observations in subsequent months."

Should Sentinel identify an asteroid potentially on a course to impact the Earth from its perspective, it will provide "years or decades of notice before impending impacts, sufficient to execute deflection missions," according to the foundation.

Named after the asteroid home of The Little Prince in the famous French story, the B612 Foundation has evangelized on the subject of asteroid deflection since its formation. The group's tacit assumption was that the task of first mapping those asteroids that could pose a risk would be undertaken by national and international space agencies, but budget cuts and rationalizations have made it clear that this would not be the case. Hence the foundation's decision to embark on that process itself, something it has now raised sufficient funds to initiate.