KiloLambda unveils a solid-state optical filter that blocks incoming laser light based on power rather than wavelength. 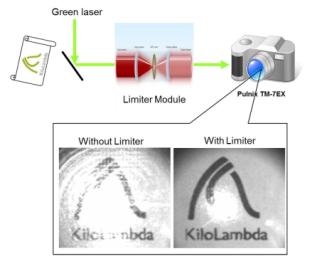 The deliberate dazzling of pilots by laser pointers shone from the ground is an ongoing concern for commercial airlines, as well as a potentially significant threat in many security and military imaging scenarios.

At SPIE DSS 2012 in Baltimore, KiloLambda Technologies presented an optical filter developed to protect both human eyes and image sensors from such lasers, and limit the damage caused. The solution is based not on blocking specific wavelengths, but rather on limiting the transmission for certain powers of laser light.

The company already produces dynamic sunlight filters, in which a passive optical layer changes transparency under changing intensities of ambient light, and optical fuses for telecoms networks, which shut off transmission in optical fibers at desired power levels. The new anti-dazzle solution is an extension of that technology.

"The principle behind the anti-dazzle material was to produce a layer of smart material, which knows when to interfere," said KiloLambda's Ariela Donval in Baltimore. "Unlike fixed spectral filters, which permanently block only specific wavelengths, the KiloLambda wide-band filter is clear at all wavelengths until it is hit by an incoming power above a certain level. Below the threshold, the filter has high transmission over the whole spectral band, but when the input power exceeds the threshold, transmission is either limited to a certain value or blocked completely."

Keeping a clear view
Introducing the filter at the focus of the optical system enables it to react to low threshold powers, while still enabling a clear view of the overall image by the sensor.

While the incoming laser power stays below a particular value, the action of the optical power limiter is reversible and the filter becomes transparent again when the input power drops back to normal levels. When the power exceeds an upper threshold, the filter shows catastrophic breakdown, and the localized spots being hit by the laser turn permanently opaque, thus blocking the incident light completely at that point but without blocking a significant portion of the field of view.

"With the filter in place, the area of damage and the point of 'impact' is clearly seen, allowing the direction from which the laser came to be identified," noted Donval.

As a result the filter can theoretically either limit the transmitted power to a prescribed level even while the incoming power increases, or completely block all transmitted power above a desired point, depending on the application. The layer of non-linear nanostructures can be sandwiched between two glass surfaces, or used as a stand-alone material. KiloLambda envisages incorporating it into the night-vision goggles routinely worn by pilots, with further applications in cameras, military sights, or satellites.

The company has identified four distinct categories of problem for pilots when targeted by such lasers: Laser power densities from 0.05 µW/cm2 up to 5 µW/cm2 can startle and cause distraction, while 5 µW/cm2 up to 100 µW/cm2 cause glare and disruption.

Power densities from 100 µW/cm2 up to 1000 µW/cm2 can cause temporary flash blindness, akin to the effect of a camera flash, and levels higher than 1000 µW/cm2 can lead to eye damage and vision loss.

"At present we are working on filters applicable to the flash blindness case, rather than to powers in the eye-damaging range," commented Donval.