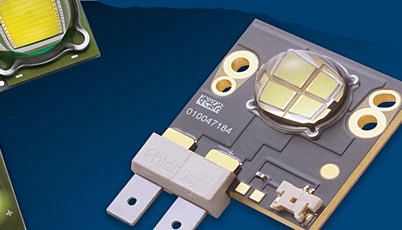 At April’s Light + Building show in Frankfurt, Germany, Fraen Optics and Luminus Devices announced the release of the FML series of optics, which are designed to maximize the performance of Luminus's SST-90 and SSM-80 LEDs.

"We believe that the new FML optics from Fraen are truly game changing," said Chuck DeMilo, Global Director of Product Marketing for Luminus. "The FML optics enable our customers to capture and deliver the lumens on task at unprecedented levels of intensity, efficiency and uniformity. Using an LED to outperform a 50W MR-16 halogen lamp used to be a dream, but the combination of technologies from Luminus and Fraen has made this a reality."

TIR optics are frequently preferred over reflectors due to higher optical efficiency and center beam brightness in spot lighting applications. According to David Cohen, Chief Operating Officer of Fraen Optics, "Fraen really pushed the limits of physics with this new family of optics. Part of the secret sauce with the FML series is an innovative optical mixing chamber that homogenizes the input from the LED to deliver a stunningly uniform beam."

Cohen added, "Luminus LEDs are unique because optically they can be considered a high intensity point source of light, and this opens many new degrees of freedom for our optical designers."

Fraen Optics, a Division of Fraen Corporation, specializes in the manufacture of optics for high-powered LEDs. The company offers a wide range of standard products for all major LED manufacturers as well as custom-optic design services. Fraen's divisions include its Advanced Manufacturing Division, which manufactures stepper motors; its Custom Manufacturing Division, which specializes in lighted-plastic parts and complex stampings; and Fraen Machining Corporation, which manufactures precision-turned metal components.