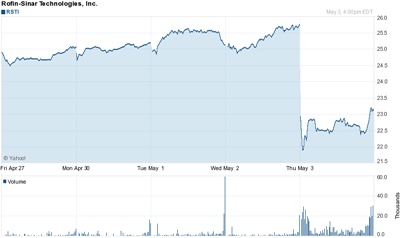 A weaker-than-expected sales forecast for the forthcoming quarter from the industrial laser giant Rofin-Sinar Technologies has dragged the value of the company down by more than 15%.

Reporting financial results for the first three months of the year (Rofin’s second quarter of its fiscal 2012), CEO Günther Braun said that the economic weakness witnessed towards the end of 2011 had spilled over into this year – but added that demand from the key machine tool industry had since recovered.

Rofin has also seen solid business in the medical sector, where its lasers are used to machine high-precision devices, and – more surprisingly – from the photovoltaics industry, despite a steep decline in capital equipment spending in the beleaguered sector over the past year. Braun highlighted strong relationships with a thin-film PV manufacturer as the reason for that.

Overall, the company posted sales of $129.4 million, down 5% from the same period last year because of the weaker demand in both machine tools and the microelectronics industry, and lower than the $135 million expected by Mark Douglass at Longbow Research..

The figure also represented a slight decline on a sequential basis from what was widely regarded as a weak Q1, while Braun disappointed analysts with the company’s outlook for the current quarter, in which revenues are expected to be in the range of $130 million to $135 million.

But with a strong book-to-bill ratio in the quarter and what appears to be growing traction in fiber lasers – its subsidiary Nufern has just signed a major supply deal with the US military - the CEO is maintaining a expectations for the year as a whole, suggesting that sales will be particularly strong in the September quarter (Rofin’s fourth fiscal quarter of 2012).

Fiber laser demand
On the fiber laser front, Braun said that Rofin now had a backlog of 86 high-power sources to ship (Nufern’s military order comprises 46), and that the company was on track with its ongoing cost-reduction program – something that largely involves getting more power out of each individual laser diode module, so that fewer modules are required per fiber laser.

However, the CEO refused to go into details about the number of customers that had committed to ordering high-power fiber lasers.

One application area where fiber lasers are making inroads more generally is in automotive manufacturing – as highlighted by IPG Photonics in its own quarterly update earlier this week.

Braun said that the automotive industry was moving increasingly towards 1 µm sources (i.e. diode-pumped, including fiber lasers), although he still sees an important role for CO2 lasers.

He also noted early signs of an upturn in the semiconductor market, where one of the main applications for Rofin’s lasers is to mark LEDs, and said that expected developments in intellectual property should see the company expand its applications base in this area soon. Other laser firms, for example Coherent, have highlighted the role that lasers can increasingly play in the dicing of LED wafers into individual emitters – a key back-end manufacturing step.

Rofin posted a net income of $8.2 million for the latest quarter – exactly the same figure as in the prior period, but down 37% compared with the same quarter last year.

“We are cautiously optimistic, given the current booking trend with strong order entry in February and March, that we will deliver better results in the upcoming quarters,” concluded Braun.