But the laser and photonic subsystem provider sees an upturn in demand from the semiconductor market, and long-term potential in defense. 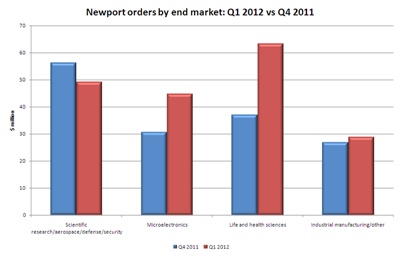 Newport Corporation, the top-tier supplier of lasers and photonics equipment, has reduced its sales guidance for fiscal 2012, despite continued expectations of an upturn in demand in the second half of the year.

The company reported a record level of orders for the opening quarter of 2012, but the increase was largely due to the impact of its recent acquisitions, including one huge order for ultrafast sources to be used in laser surgery. Over the past year, Newport has bought Ophir Optronics, High-Q Laser, ILX Lightwave and Opticoat.

Sales are expected to remain flat in the current quarter, before picking up later in the year. Newport said that sales in the second half should be 7-12% higher than in the first half, bringing full-year revenues of between $650 million and $665 million – a $20 million reduction from its previous estimate.

CEO Robert Phillippy and CFO Chuck Cargile said that the cut in guidance was largely due to unexpectedly weak orders from the research sector in the first quarter of the year. And although they also pointed to a “snap-back” in demand from the aerospace and defense market relating to the Ophir division, Newport's stock price dropped sharply following the update.

Defense and security prospects
Phillippy was in attendance at last week’s SPIE Defense, Security and Sensing show in Baltimore, Maryland, and told investors that he drew two key take-aways from the event.

Unsurprisingly, one was that demand from the US defense sector is in the doldrums as a result of wider cuts in Department of Defense spending, but the second is that, in the long term, prospects for photonics look strong – and that Newport has plenty of headroom to grow its defense sector penetration. Currently, aerospace and defense applications account for only 10-15% of the company’s sales.

Phillippy pointed to the trend towards using unmanned vehicles and systems as a key driver for greater use of optics and photonics, in place of what the CEO described as “feet on the street” human resources, which are being cut back aggressively.

Microelectronics bounce
The executive team said that the integration of Austria’s High-Q Laser, which specializes in ultrafast sources, with its Spectra Physics division was already paying dividends in the form of technological innovation. High-Q has also made a significant contribution to the company’s order book, thanks to a $37.7 million contract to supply ultrafast lasers for surgical applications that are set to be shipped over the course of 2012 and 2013.

That deal was the main reason behind a 71% sequential increase in orders for life and health sciences applications, which reached a new high of $63.2 million in the quarter. And while orders relating to the scientific research, aerospace, defense and security sector were down 10% from the closing quarter of 2011, Newport’s two other reporting divisions – microelectronics and industrial manufacturing – were both up sharply.

Microelectronics in particular saw a 46% sequential increase, indicating that a recovery from the semiconductor industry’s latest “bust” period is on the way – at least in some specific areas.

Last week KLA-Tencor, one of Newport’s key OEM customers, said that demand for its process control tools was growing – largely for mobile electronics applications, while the SEMI industry trade group recently reported that the book-to-bill ratio for semiconductor equipment was back above unity for the first time in 18 months.

Newport, which also paid off a chunk of debt in the latest quarter, posted a pre-tax profit of $8 million for the period, down from $21.7 million a year ago. In early trading following the latest quarterly announcement, Newport’s stock fell by more than 10% to around $15, valuing the company at approximately $650 million.