Onwards and upwards for the fiber laser specialist, whose products are directly boosting the productivity of US auto manufacturers. 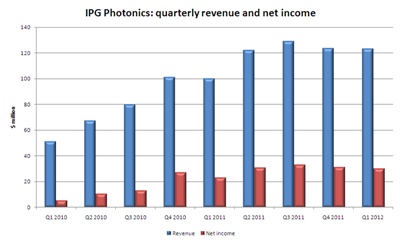 Shares in IPG Photonics have risen again, after the fiber laser pioneer posted another sharp increase in both sales and profits in the opening quarter of 2012.

At $123.2 million, revenues were down very slightly on a sequential basis, but jumped 23% on the same period in 2011 thanks to growing demand for high-power lasers, mostly destined for materials processing applications.

Recent shipments of particularly high-power lasers, which command a higher price, pushed IPG’s already very healthy profit margins even higher, enabling the company to post a pre-tax profit of $43.6 million – up 30% compared with the first quarter of 2011.

One of the reasons for the jump in revenues from high-power lasers is an increase in sales to automotive manufacturers, particularly to the resurgent US car industry. IPG’s CFO Tim Mammen highlighted one application of a laser system for roof welding at a US car plant, in which an IPG laser has been retro-fitted in place of a Nd:YAG laser - and doubled car production throughput in the process.

The company also sees huge potential for its medium-power quasi-CW (QCW) fiber lasers to replace existing lamp-pumped YAG lasers already in the field, as users look to upgrade their tools. Both Mammen and CEO Valentin Gapontsev touted this as an area where there will be major sales growth over the next couple of years.

A year ago, those QCW lasers were still being sold at a significant premium to the more conventional Nd:YAG lasers, but Mammen said that pricing was now “directly competitive”. The CFO added: “That's why we believe we're on the verge of being able to substantially increase QCW sales. There's a huge installed base of lamp-pumped YAG lasers, which we believe people can now seriously consider retro-fitting with our QCW. We believe that's going to start in the next year and gather momentum.”

Cash pile
IPG’s growing profits added another tranche of cash to its already bulging balance sheet in the quarter, following on from a $145 million public stock offering in March. IPG now has in excess of $377 million in the bank (and negligible debt), easily enough to cover its extensive plans for capital expenditures this year, and raising speculation of merger and acquisition activity.

Commenting on the March stock offering with investors – some of whom were less than impressed by its dilutive effect - Gapontsev said that the proceeds provided IPG with “tremendous flexibility”, and the ability to capitalize on opportunities as they emerged.

“The net proceeds of the offering provide IPG with the financial flexibility to fund capital expenditures and working capital requirements, as well as to complete acquisitions of complementary businesses and technologies,” Gapontsev said.

He and Mammen hinted at the kinds of businesses that IPG might be likely to acquire, with the CFO saying that they were interested in extending the company’s geographical reach and accelerating sales growth. More specifically, Mammen cited the areas of fine materials processing, shorter-wavelength lasers and plastics processing (which requires longer wavelengths, as provided by the company’s 2 µm thulium-doped lasers) as potential areas for acquisitions.

“I think that the strategy is fairly well articulated,” Mammen said. “And you'll hopefully see us execute on that in the next couple of years.” 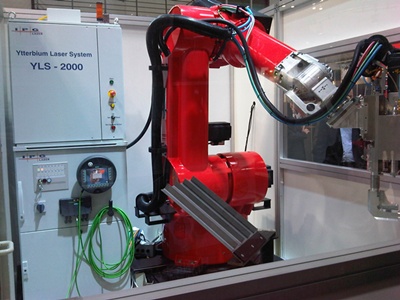 Capex spending grows
But in the short term, IPG’s cash is being spent on extending the company’s existing activities, with Gapontsev noting that $13.8 million was invested in capital expenditure in the latest quarter, a figure likely to rise to as much as $60 million for the full year.

The company expects sales to increase by a factor of up to four for each dollar of capex invested, suggesting that, once fully implemented, this year’s investment could deliver an additional $240 million in annual revenues.

Some of the capex is being used to purchase new molecular beam epitaxy (MBE) tools, which will double growth capacity at the company’s Oxford, Massachusetts, laser diode manufacturing facility - one of the most critical elements of the vertically integrated business, and something that has historically given IPG a major competitive advantage over its rivals.

“We're still not seeing any real increase in competition, despite multiple announcements by other laser companies around the world, particularly on the high-power side, where we continue to have a tremendous quality and price advantage. People have got a very long way to catch up.”

Competition playing catch-up
Among the potential competitors are Rofin-Sinar and the GSI Group subsidiary JK Lasers, which has just launched its 2 kW JK2000FL, promising the ability to cut low carbon steel up to 15 mm-thick, and 10 mm-thick stainless steel. Coherent is also set to launch its 1 kW offering in the next few months, with the US company claiming last week that it has developed an advantage through the laser being insensitive to back-reflections.

But Gapontsev was particularly dismissive of that claim, saying: “We resolved the problem with back reflection six, maybe seven years ago. We never have any problem with it.”

High-power direct-diode systems are also suggested by some in the industry as an emerging threat to fiber lasers, but Mammen rubbished that claim too: “We continue to believe that direct-diode lasers have an inferior beam quality and reliability to our fiber lasers, primarily because they're pumped by diode bars,” he said.

And the CFO added this stinging rebuff to those talking up direct-diode systems: “Most people who like to talk about [direct-] diode lasers talk about them because they're not capable of producing a fiber laser.”

Gapontsev also weighed in, pointing out that with its industry-leading laser diode capability, IPG could also build high-power direct-diode lasers but generally chose not to: “We have both [fiber and direct-diode technologies], and we advise all our customers to use fiber, not diode. If they insist, we will also ship them diode. But fiber is much better.”

With strong momentum in the US automotive industry and expectations of growing demand from Japan for cutting and welding applications in the second half of this year, IPG said that it would post sales of between $128 million and $138 million in the current quarter.

Shares in the company’s stock rose by around 10% to $55 following the results announcement and positive guidance, valuing the company at close to $2.6 billion.