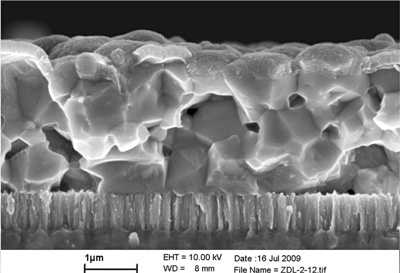 The Catalonia Institute for Energy Research (IREC) in Barcelona is to head up a €10.3 million, three-and-a-half year project aiming to scale up the production of new types of low-cost thin-film solar cells.

Armed with €7.5 million in funding from the European Commission and the balance from project partners, the “SCALENANO” project’s key target is to demonstrate that copper indium gallium diselenide (CIGS) cells can be produced using a printing technology rather than expensive vacuum deposition.

But the 13 consortium members will also look at replacing the rare and expensive indium material in the cell chemistry with much more common elements such as zinc, iron and tin.

Known as “kesterite” materials, these compounds are in theory cheaper to produce than conventional CIGS, and IBM Research has previously demonstrated kesterite cells with a solar conversion efficiency of close to 10%.

In contrast, research-level CIGS cells have been shown to have an efficiency of more than 20%. But in commercial production the story is different: even the most advanced CIGS cells today have a maximum efficiency of only around 13%, and must be produced using costly vacuum equipment.

Running until mid-2015, the SCALENANO effort includes university teams from the UK, Germany, Luxembourg and Italy, alongside institutions based in Switzerland, France, Germany and Italy.

Commercial partners include the chemicals giant Merck, the UK-based deposition specialist Innovative Materials Processing Technologies (IMPT), Hungarian metrology firm Semilab and NEXCIS, a French PV start-up with close links to the state-owned energy company EDF. NEXCIS is focused on developing next-generation CIGS cells, and claims to have demonstrated one-step electro-deposited devices with an efficiency of 11.4% in its research labs. It is hopeful of moving to commercial production with the technology in the next 3-4 years.

Cutting annealing costs
According to the European Commission’s Framework Programme 7 (FP7) web page on the SCALENANO project, Phillip Dale, head of the Electrodeposition Group under the Laboratory of Photovoltaics at the University of Luxembourg, says that the main objective is to bring the cost of solar energy down and to enable much more widespread adoption of the technology than is economically feasible at present.

The Luxembourg team’s contribution to the project will be to optimize the process of combining and heating the chemicals that make up the cell in a rapid thermal annealing furnace. Reducing the time needed for this annealing step should cut cell production costs.

CIGS companies have been among the worst hit by the current economic shake-out that is tearing through the PV industry. Examples include Soltecture (formerly Sulfurcell) recently applying to open insolvency proceedings, and the high-profile collapse of US-based Solyndra last year.

But some CIGS companies have been able to secure recent investment, for example Stion Solar, MiaSolé and HelioVolt in 2011, and AQT Solar earlier this year.

Even if those companies are successful, the relative scarcity of indium is expected to become a problem in the longer term, and to restrict the extent to which CIGS-based PV cell production and deployment can be ramped up on a cost-effective basis.

As a “next generation” solar material, kesterite promises to overcome that problem, but the technology will only be viable if its conversion efficiency can be increased significantly.