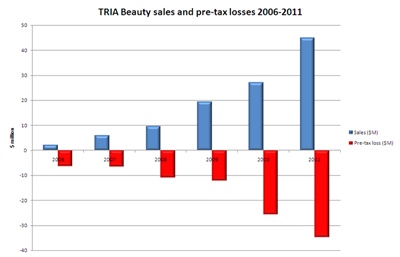 TRIA Beauty, a Californian firm that specializes in hand-held laser diode systems for hair removal, acne treatment and anti-ageing applications has delayed its attempt for an initial public offering (IPO) of stock, citing stock market volatility as the reason for the postponement.

The company, which boasts of backing from high-profile socialite Kim Kardashian among others, filed its S-1 registration form in January this year, and had been hoping to raise gross proceeds of around $80 million.

In a statement announcing the postponement, CEO Kevin Appelbaum said: “The current volatility of the stock market and ongoing global economic instability do not provide an attractive environment for us to price this transaction at this time.”

By far the company’s most important product is a diode laser device for hair removal, from which it derives the vast majority of its sales. The company also sells a non-laser blue-light system for acne treatment, and is working on a new product for skin rejuvenation that it is hoping to launch this year.

All of the devices are designed to bring aesthetic light-based treatments out of the physician’s clinic and into the home of consumers – seen as a strong trend in the aesthetics market.

The postponement comes at a tricky time for the company. Although it has attracted some $47 million in venture capital over the past couple of years from investors including Aisling Capital, De Novo Ventures, Vivo Ventures and the Technology Partners Fund, its S-1 documents filed with the US Securities & Exchange Commission (SEC) show that it is both racking up substantial losses and has a large loan to pay off.

In January, just a month after its latest round of equity funding, TRIA agreed a $27 million loan deal secured on all of the company’s assets save for its intellectual property. Some of the $20 million drawn down on that loan so far went towards paying off outstanding loan notes, but with interest mounting up at 9.4% on the new loan at a time when its operating losses are also growing quickly, the company is in need of additional cash.

Widening losses
Sales figures stretching back to 2006 show that, while TRIA has rapidly grown in terms of sales revenues over the past five years, its losses have widened at almost the same rate.

More recently, the situation looks to have worsened. In 2011, TRIA posted a 75% year-on-year increase in sales to $45 million, but pre-tax losses widened again, to $34.8 million.

TRIA has outsourced its manufacturing to Singapore-headquartered contractor Flextronics since September 2010, helping to maintain healthy-looking gross margins of around 50%. The key reason for the losses racking up appears to be in sales and marketing, where a spend of $32.3 million last year – amounting to a remarkable 72% of sales revenues - was largely a result of huge advertising costs.

Under the terms of its latest loan deal, TRIA will be able to draw down the remaining $7 million on the condition that it launches its latest product – its “skin-rejuvenating laser”, which is described as a fractional, non-ablative laser device aimed at anti-ageing applications.

Rejuvenation plans
According to the firm’s S-1 registration, TRIA received Health Canada clearance in April 2012 to market this device in Canada for the treatment of wrinkles, skin discoloration and rough skin, while it also expects to obtain European CE mark approval and begin selling the device outside the US in the second half of the year.

“We believe that our pivotal clinical studies will support a 2012 [US Food & Drug Administration] application for over-the-counter (OTC) treatment of periorbital wrinkles (crow’s feet), perioral wrinkles (wrinkles around the mouth), dyschromia (uneven pigmentation) and textural irregularities like tactile roughness, for which fractional non-ablative technology has become an accepted treatment standard,” states the S-1 filing.

“We also believe that these clinical studies will demonstrate that our device has safety and effectiveness results comparable to those obtained by fractional non-ablative laser treatments in a physician’s office.”

Despite the IPO postponement, TRIA says that it does not plan to withdraw the registration. It will continue to evaluate the timing of the offering, which is being supported by Morgan Stanley and Piper Jaffray as joint book-running managers and Wells Fargo Securities as co-manager.