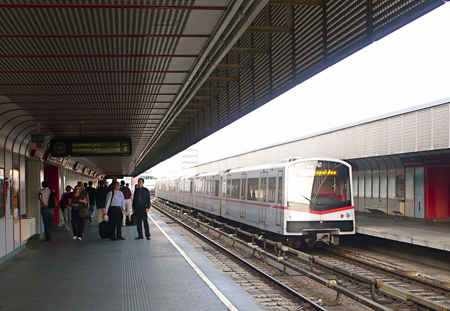 Now arriving: the 3D laser system can boost safety even at 100 kmh.

A 3D laser scanner housed in a prototype system developed at the Fraunhofer Institute for Physical Measurement Techniques (IPMS) in Freiburg, Germany, can boost the safety and reliability of rail transport.

Whether it is to simply determine whether a vital contact wire is missing or faulty, or, at the macro scale, to remotely discover the track situation at the entrance to a station or in a tunnel, the scanner has a variety of applications to make train journeys safer.

Dr. Heinrich Höfler and Dipl.-Ing. Harald Wölfelschneider from the Fraunhofer IPMS have, with their team, developed a 3D laser scanner that can be used in various “outdoor” railway situations without problem. Extremely fast and precise, the system can spatially measure and monitor the position of a contact wire or the track from a train travelling at up to 100 kmh (62 mph). Alternatively, if the scanner is stationary, it can image passing trains and check for loads that might have slipped and other features.

Heinrich Höfler explains: “We send off a laser beam and wait until it returns. We measure the time in between and that tells us how far away the object is. The difficult part is capturing the returning beam. Often, only very little light comes back and what‘s more, the transmitted light beam is back in an extremely short space of time."

The solution: a kind of slow motion. The laser beam is very rapidly modulated (switched off and on). The time shift of this modulation wave can be determined more quickly and precisely than is possible from a single laser pulse.

Spotting obstacles and constrictions - at speed

The system measures distances and speeds, by default, at around one million times per second. “For Deutsche Bundesbahn (German Railways), we equipped a measurement train that scans the surroundings of the test track, using several laser beams and which performs four million measurements per second, creating a 3D image of what it scans,” explained Wölfelschneider. 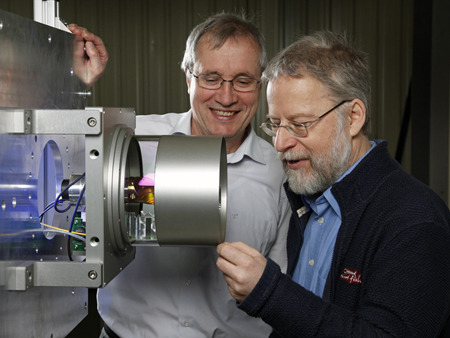 "That rate allows even small obstacles and constrictions to be detected, or, for example, we can plan the route via which a heavy load can best be transported to its destination."

Another field of rail application is the measurement of passing trains. This requires the scanner to be permanently mounted, which, however, does increase the chance of someone looking into the laser beam for a longer period. To make the scanner safe for the human eye, the researchers had to develop a new wavelength range around infrared, which is eyesafe. The consequence of this was that the entire system needed to be fully reconfigured.

From railway to road – worldwide

Höfler added, "If we examine railways carefully, it makes sense that we then also examine other traffic routes, such as roads. The team at IPM has developed a 3D scanner, safe for the human eye, which can be mounted onto a moving car and which scans the road from a height of about three meters. We can now detect height differences of even 0.2 mm on the road surface, even at speeds of 80 kmh (50 mph). This is the first scanner to be approved for this purpose by the (German) Federal Highway Research Institute. It is designed to detect lane grooves, potholes and water drainage potentials.

The laser system has already been marketed and used successfully worldwide for rail traffic safety. Not only fast and precise, this system is also highly robust. As a consequence of this development Heinrich Höfler and Harald Wölfelschneider are to be presented with one of the 2012 Joseph-von-Fraunhofer awards for this eye-safe 3D laser scanner.