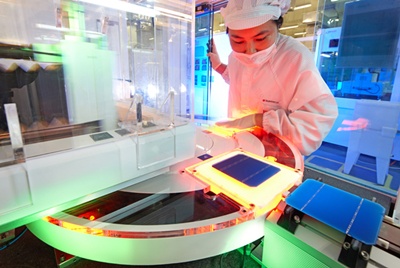 An investigation by the US Department of Commerce has found that Chinese manufacturers are selling crystalline silicon photovoltaic cells at less than their fair value in the US, and that tariffs of between 31% and 250% should be added to their cost – a much higher level than many had expected.

The preliminary decision on the so-called “dumping” activity follows a similar ruling in March that Chinese companies were also being subsidized by central government, although the proposed tariffs in that case were much smaller.

If ratified in a final determination by the department later this year, those tariffs will be collected on imports of Chinese-made PV cells, and modules or panels containing them. The investigation has also agreed to petitioner SolarWorld’s charge that “critical circumstances” exist – meaning that extensive dumping was found to take place ahead of the ruling, and that the tariff rates are applicable to all imports since mid-February.

Suntech Power, the world’s largest provider of crystalline silicon cells, was found to be dumping at a margin of 31.22%, while Trina Solar’s level was set at 31.14%. Most other Chinese manufacturers, including the major suppliers Hanwha, Yingli, LDK, Jinko and JA Solar, were at 31.18%. Any companies outside of the main list of around 60 firms have been set a margin rate of just under 250%.

SolarWorld happy; others not
Unsurprisingly, Germany-headquartered SolarWorld reacted enthusiastically to the development, and may now decide to launch a similar case in Europe, where the plummeting cost of solar cells and modules has contributed to the demise of some major manufacturers.

“Today’s announcement gives rise to the possibility that domestic solar manufacturing, environmentally sustainable solar production and robust global competition might one day soon return to boosting US manufacturing, jobs and energy security,” said Gordon Brinser, president of SolarWorld’s US subsidiary and chief protagonist behind the complaint.

But aside from SolarWorld and its relatively obscure partners in the self-styled “Coalition for American Solar Manufacturing (CASM)”, the decision was far less welcome – sparking accusations of protectionism and fears of a negative impact on the US solar market.

In a joint statement, Hemlock Semiconductor and Dow Corning – both suppliers of polysilicon feedstock that is used to make PV cells in both the US and China – said that far from protecting the US market, the decision would have the opposite effect, and prove “devastating” to the growth and adoption of solar technology in the US.

“This decision will make it more expensive and difficult for the US to have access to the most proven and cost-effective solar technologies – weakening the US solar industry at a critical point in its development,” predicted Dow Corning CEO Robert Hansen and his Hemlock counterpart Andrew Tometich.

“While Germany-based SolarWorld and its co-litigants may initially benefit from the decision, the industry overall in the US will suffer – some economists believe that thousands of US jobs could be lost, about half tied directly to the industry, if duties are imposed.”

Tom Gutierrez, the CEO of silicon and sapphire material specialist GT Advanced Technologies, added that the decision could harm GT, as well as US-based REC Silicon and MEMC. "Ultimately, protectionism fosters dependence and high-cost business models, rather than innovation and agile approaches required for companies to succeed in the global marketplace," he said.

CASE: “Damaging” decision
Meanwhile the US Coalition for Affordable Solar Energy (CASE), which appears to have much wider industry support than the CASM in terms of the sheer number of workers represented, called the tariff decision “damaging” and suggested that it may initiate a trade war with China.

CASE president Jigar Shah directly accused SolarWorld, saying that the company would now effectively receive an average 31% subsidy through a tax on its major Chinese competitors. “What’s worse, it will ultimately come right out of the paychecks of American solar workers,” said Shah in a statement.

He also noted that the preliminary tariff decision did not go as far as the original SolarWorld petition had requested (250%), and pointed out that before the final decision is reached later this year there could be changes to reduce the level of the tariff.

According to a Reuters report quoting a statement by its Ministry of Commerce, the Chinese government did not threaten any immediate retaliation, but suggested that the US was sending out a negative signal about trade protectionism and deliberately provoking friction in the clean energy sector.

“Innovation, not litigation”
The Chinese companies directly affected, many of whom have US operations, made their feelings clear immediately. Suntech Power’s chief commercial officer Andrew Beebe said that the proposed duties “did not reflect the reality of a highly competitive global solar industry”, adding that the company would continue to press the Department of Commerce to explain why the penalties are unjustified.

“As a global company with global supply chains and manufacturing facilities in three countries, including the United States, we are providing our US customers with hundreds of megawatts of quality solar products that are not subject to these tariffs," he continued.

“Despite these harmful trade barriers, we hope that the US, China and all countries will engage in constructive dialogue to avert a deepening solar trade war. Suntech opposes trade barriers at any point in the global solar supply chain. All leading companies in the global solar industry want to see a trade war averted. We need more competition and innovation, not litigation."

Liangsheng Miao, the CEO of China-based Yingli Green Energy, said that the tariffs would be disruptive and destructive for the entire solar industry, but added: “We remain fully committed to serving the US market irrespective of the outcome of these proceedings, and we will continue to strive for a global, competitive marketplace.”

The next key date in the case is October 9, when the Department of Commerce is due to issue its final determination on the matter. Unless the department has a complete change of heart, that will be followed by a final determination and the issuance of orders to collect import duties by the US International Trade Commission in late November.