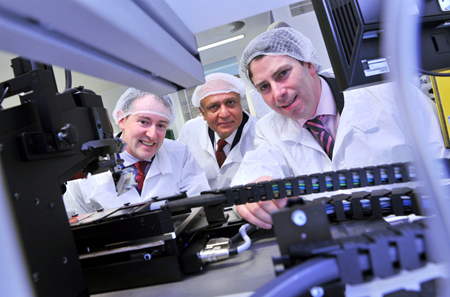 InfiniLED, a spin-out company from Ireland’s Tyndall National Institute, University College Cork, has announced the closing of a first round investment led by IL Investment Group from Quebec, Canada. The total investment may reach up to €1.6million, including support from Enterprise Ireland.

The company develops a range of LED light source modules based on its patented µLED (microLED) technology, which it has licensed from Tyndall National Institute. InfiniLED already has a number of on-going development contracts with unnamed international customers. It is aiming to bring the first µLED-based products to market before the end of 2012. The areas of application for InfiniLED technology range from diagnostic testing devices to consumer products.

The investment will immediately result in the creation of eight new high-tech positions at InfiniLED with up to 16 staff targeted by the end of 2013. All the positions will be at a graduate level including a significant number of PhDs to support on-going development. The investment will allow InfiniLED to continue the development of its technology and enable it to further grow the commercial interest that has already been generated.

IL Investment is an investment group based in Canada comprising successful high technology entrepreneurs who over 40 years have started a number of high-technology companies. With at least ten successful exits IL Investment has experience of leading its fledgling companies from the initial period towards full market acceptance.

Joe O’Keeffe, CEO of InfiniLED, commented, “Our µLED technology offers a range of benefits to our customers. It can reduce power consumption in displays which results in increased battery life for devices such as mobile phones, laptops or other consumer products. It enables new medical devices which are smaller, more efficient and more accurate. The technology can also be used in individually switchable arrays. This allows their use for faster LED printing, microscopy and lithography applications. Essentially, any product that requires controlled or the efficient use of light may benefit from this unique technology.”

Najeeb Khalid, a principle at IL Investment, said, “IL Investment is delighted to be partnering with InfiniLED on this project.” said. “We believe this investment will enable InfiniLED to grow and deliver on its significant commercial potential. We have been very impressed by the team assembled and the work carried out to date with the µLEDs. The team behind IL Investment has a history of the successful growth of high technology companies. With InfiniLED we see the opportunity to continue this and bring exciting new products to the market.”

InfiniLED’s Chief Commercial Officer and co-founder Bill Henry, who previously worked as a PhD at the Tyndall National Institute told optics.org, “Although we are currently using manufacturing facilities at Tyndall, we are outgrowing that and already looking at using larger fabricators in the UK and Europe. So far the larger demands we have received have been of the order of tens of millions of units but if we reach much larger demand volumes we will possibly have to consider outsourcing manufacture to the Far East.”

The technology that underpins InfiniLED was supported by Enterprise Ireland [Irish Government] funding during its development. Speaking at the Canadian investment announcement event, Seán Sherlock TD, Minister for Research and Innovation said: “The Government’s Action Plan for Jobs clearly sets out the importance of targeting and supporting areas of research with strong potential for commercialization and job creation. The ability of new high potential start-up companies like InfiniLED to attract investment and create hi-tech jobs is vital for the growth and development of our indigenous knowledge economy.

”This further investment is an endorsement of that support. The progress of InfiniLED also provides an excellent example of the route of research from the laboratory to the market. It provides a strong model for others to follow in the future,” he added.

The micro-LED technology was invented by a team of researchers led by Brian Corbett at Tyndall National Institute, supported and funded by Enterprise Ireland. Under the Enterprise Ireland Business Partner Programme, Entrepreneur Joe O’Keeffe, who has already spun out a series of successful companies, evaluated the commercial potential of the µLED.

InfiniLED is targeting initially the following three market segments, where the µLED’s advantages will be most effective:

Analytical / Point Of Care / Medical instrumentation, where the benefits are battery life extension and size reduction via simplified heat sinking and the elimination of optics.

Backlighting for mobile phones, TVs and monitors, where the benefit is reduced energy consumption and extended battery life.

The company was launched in April 2011 and was co-founded by Dr Bill Henry. He had worked on the development of the technology and the commercial opportunities while at Tyndall. The securing of this investment marks the next step in moving this world-class Irish research from the lab into the market place. It will allow InfiniLED to build its team, to ramp-up development of the technology and to target new opportunities.