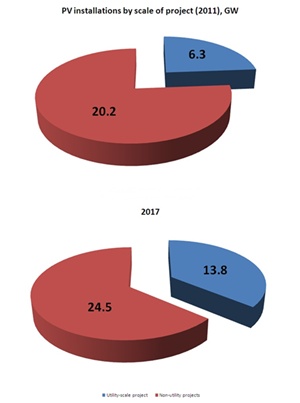 Photovoltaics industry revenues will slump by more than 15% this year as demand flattens out from the boom years of 2010 and 2011, but annual installations will grow to 38.3 GW in 2017 as the need for subsidies disappears.

That’s according to a new report from the respected market analyst company Lux Research. Matt Feinstein, lead author of the “Push to a Post-Subsidy Solar Industry” report, was one of the first to predict the demise of Solyndra and the current industry shake-out that is seeing companies disappear on what seems like a weekly basis.

The Lux team reckons that 26.5 GW of new installations were constructed in 2011 – up 66% from around 16 GW in 2011. But the rapid expansion seen in both 2010 and 2011, which has been fueled by feed-in tariffs in Europe, the 1603 Cash Grant legislation in the US, and a glut of cheap Chinese-made PV modules, will come to an abrupt halt this year.

Feinstein does not expect the level of installations to shrink this year – he predicts slight growth to 26.9 GW – but with continued price pressure, he thinks that total PV industry revenues will slump from $110 billion last year to only $92 billion in 2012.

Another rush to beat incentive cuts
Not all analysts are as bearish as Lux on the prospects for the PV industry in 2012. Ash Sharma at IMS Research, now part of the giant IHS market research empire, measures 2011 installations at 26.9 GW, a slightly higher level than Lux. But he thinks that the installations will grow by at least 4% this year, and possibly as much as 21%, as there is yet another rush to beat feed-in tariff cut-offs.

In Sharma’s “optimistic” forecast, the market reaches 32.6 GW this year, with Sharma saying: “It is no longer a case of whether the PV market will grow in 2012, the real question now is by how much will it grow. When you only consider a handful of countries like Germany, Italy and France, it’s easy to be pessimistic about demand; however, when you look further afield and analyze demand from 60 countries, the picture becomes much more positive.”

To determine the viability and competitiveness of PV around the world as subsidies dwindle, Feinstein and his colleagues ran a levelized cost of energy (LCOE) analysis of conditions across 156 separate geographies.

Currently, utility-scale projects account for about 25% of the overall market, equivalent to 6.3 GW in 2011, with the US emerging as one of the major drivers of that approach. But the bulk of the market still relies on small-scale and residential installations supported by feed-in tariffs, particularly in Germany.

By 2017, suggests Feinstein’s report, utility-scale applications will account for more than one-third of all PV installations, equivalent to 13.8 GW. A big part of the reason for that will be the emergence of China, which will likely become the world’s second-largest PV market this year. Feinstein suggests that conditions in the country favor fewer, larger-scale projects that allow for greater control over financing and regulation.

Japan re-emerges
One new factor that will also come into play will be the re-emergence of post-Fukushima Japan as a key PV market. While the precise nature of incentives for solar deployments in Japan is yet to become clear, a feed-in tariff program will begin this summer, and Bloomberg’s New Energy Finance (BNEF) division in Tokyo says that the proposed returns will lead to a surge in PV project proposals.

That could deliver 10 GW of Japanese PV in just the next three years – making the country once again one of the largest markets for the technology. But Yugo Nakamura, head of Japan research at BNEF, warns that, as has been found in Europe, choosing the appropriate level of subsidization remains difficult – especially in a country where all energy, including “clean” technologies, are expensive.

“The [Japanese] government faces the challenge of picking the best rate for stimulating renewable energy investment while not over-paying for clean power,” Nakamura says. “With the very high rates which have been proposed there is a very real risk that Japan will experience the same boom-bust cycles we’ve seen in other countries.”