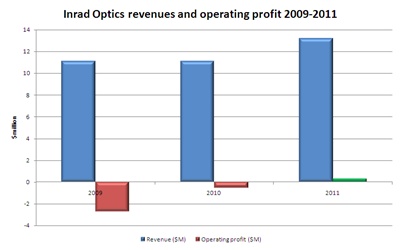 Vertically integrated components firm Inrad Optics has posted its first annual profit in three years, despite the subdued semiconductor and defense markets that it sells into primarily.

The Northvale, NJ, company saw sales drop in the fourth quarter as demand in the wider semiconductor market slumped, but its full-year revenues of $13.2 million were up nearly 20% year-on-year.

That translated to an operating income of $0.3 million, following full-year operating losses of $0.6 million in 2010 and $2.7 million in 2009. Inrad used some of the cash generated to pay off $1.1 million in accrued interest on its $2.5 million convertible loan notes.

Those loan notes are payable to Clarex, which is the majority shareholder in Inrad, and an affiliated company. They accrue interest at a rate of 6%, which can be converted into more equity if unpaid.

Last May, Inrad CEO Joe Rutherford had prioritized debt reduction as a key strategy for the company in 2011, after the company extended the terms of the loan notes for two years, to April 2013.

That strategy had started to look challenging as the US cut defense spending – especially given that Inrad had derived two-thirds of its revenues from defense and aerospace applications in 2009 and 2010. 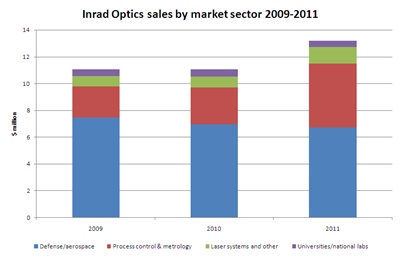 Ongoing volatility
CEO Rutherford said in the company’s earnings statement: “Although our fourth-quarter results were down compared to last year, I feel [they] reflect the ongoing economic volatility and subdued nature of both the semiconductor and worldwide defense markets.”

He also noted that despite a sharp decline in bookings in Q4, for the year as a whole they had grown by 5% to $12.9 million. The recent bookings slowdown reflects “several” large orders expected at the end of 2011 being pushed out into 2012, the CEO said.

As well as concentrating on debt reduction, Inrad Optics will now be focused on raising the profile of its new-but-old name - the recent change actually represents a return to the original name of the company (“Inrad”) when it started up operations back in 1973.

In its Securities & Exchange Commission (SEC) filing, Inrad said that the old “Photonics Product Group” moniker, adopted in September 2003 just before the acquisition of Connecticut-based Laser Optics, had not achieved the desired level of brand awareness – essentially because it comprised such commonly used words.

Switching back to “Inrad Optics” recognizes what the company calls “one of the photonic industry’s seminal crystalline products companies”.

“We are now executing on a well-considered strategic marketing plan designed to create an ongoing memory in the marketplace for Inrad Optics’ unique products and capabilities,” Rutherford concluded.