The laser company sees a surge in orders for multiphoton spectroscopy applications and materials processing, but shares fall 10%. 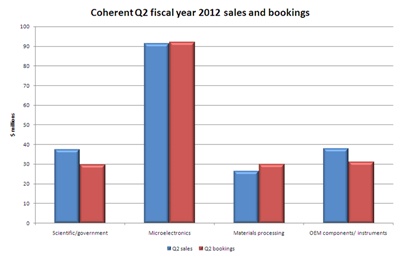 Q2 2012 sales and bookings at Coherent

Major laser vendor Coherent saw its stock price drop by close to 10% in early trading after the company announced worse-than-expected financial results for the latest quarter.

For the three months ending March 31, the second quarter of Coherent’s fiscal year 2012, the California-based company posted sales of $193 million – up sequentially but lower than the $197 million consensus held by analysts.

However, it was an unexpected hit to bottom-line performance that knocked around $100 million from the market value of the company. CEO John Ambroseo told investors that a “performance dislocation in specific excimer products” was largely to blame for a sharp fall in gross margins.

Last summer, Coherent said that it had received a huge order for excimer lasers to be used in annealing applications in FPD production. That order was worth $77 million, but it also required Coherent to make some major investments in both R&D spending and manufacturing space to develop and produce a much larger laser system.

In addition to that, the company has set up a facility in Korea to provide the hundreds of replacement laser discharge units (LDUs) that will be needed once the new FPD annealing application is up and running.

Coherent won’t reveal the precise nature of the problem with the excimer lasers, citing customer confidentiality, but did say that it was on track to ship the first excimer tubes from the new Korean site before the end of the current quarter (i.e. before the end of June).

One concern that Ambroseo referred to last year when revealing details of the major order was the availability of large ultraviolet optics needed to shape the excimer laser output. Those components are difficult to make and to ramp to production volumes, although it is not known whether this is the cause of the problem that Coherent has experienced. 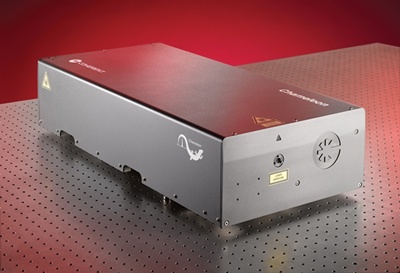 Orders boosted by patent expiration
The company also saw a sharp fall in orders from the scientific market in the latest quarter (down 31% sequentially), particularly for ultrafast laser amplifiers, although that masked a very strong uptick in demand for lasers used in multiphoton microscopy applications, and for its “Chameleon” lasers in particular.

“We believe part of the strength arose from the expiration of a key application patent, which enabled a new set of OEM suppliers to enter the market,” Ambroseo said. “We have established supply contracts for Chameleon lasers with a number of these new players.”

And while the microelectronics market remains relatively subdued for now, ahead of a likely upturn in the second half of 2012, demand from the materials processing sector has also bounced back sharply after a very weak end to 2011 and credit restrictions in the key Chinese market.

Materials processing bookings rose 32% sequentially, with Ambroseo noting major orders for lasers used in textile manufacturing. Textiles were also a key area of customer interest at last month’s LASER: World of Photonics expo in Shanghai, said the CEO, alongside the use of high-power direct diode lasers for cladding and brazing applications. “The goal is to reduce maintenance costs in the automotive, electronics, heavy equipment and semiconductor industries,” Ambroseo added.

Coherent’s high-power fiber laser development is also progressing, with a 1 kW product set to be released “in the next few months”. Ambroseo highlighted that the modular system has an advantage over some rivals in that it is insensitive to back-reflections – meaning that the laser can be fired at 90° to the surface being worked on without impacting laser performance.

“The dialog is positive,” said Ambroseo, referring to initial customer evaluations of the fiber laser. “We see that as an encouraging sign. But until we start seeing some big OEM orders I'm not ready to declare any victories.”

Margin recovery
Despite the unexpectedly high costs relating to the excimer lasers, gross margins are expected to recover throughout the rest of the year, and the FPD market opportunity – which relates to the low-temperature polycrystalline silicon (LTPS) backplane thin-film transistors (TFTs) used to drive both LCD and organic LED (OLED) displays – remains an extremely attractive one.

That’s partly because LTPS manufacturers are beginning to emerge in China, and also because LG and Samsung are both expected to begin producing OLED televisions in volume by the end of the year, while products made by Apple will be another major driver.

“Input from customers suggests that metal-oxide TFTs will not be production-ready in the short term,” Ambroseo said. “This has shifted interest towards LTPS backplanes for OLED TVs. Chinese LTPS manufacturing will be based on Japanese, Taiwanese or Korean designs. End products will address the lower end of the domestic Chinese mobile market. We expect most of the orders will be for Gen 5 and Gen 6 systems, and the order rate will be lumpy.” 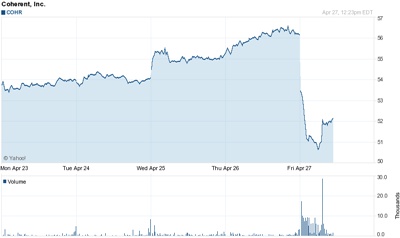 Analyst Mark Douglass from Longbow Research agrees that the long-term opportunity still looks a good one for Coherent, and believes that its stock remains undervalued – even more so following the latest fall. In a research note after the Q2 results, Douglass reiterated his price target of $70, adding that it would make sense to take advantage of share weakness.

“We think the longer-term story remains intact,” he wrote. “Some near-term hiccups on sales and margins do not change our view that the risk/reward favors purchasing the shares, especially if there is a significant pull-back post-earnings.”

Douglass sees a likely turnaround in microelectronics sales as the semiconductor market strengthens later in the year, as well as highly profitable service revenues for FPD manufacturing, plus growing demand from the materials processing and life sciences sectors.

In its outlook, Coherent said that sales in the current quarter are expected to be just about flat, at between $193 million and $195 million.