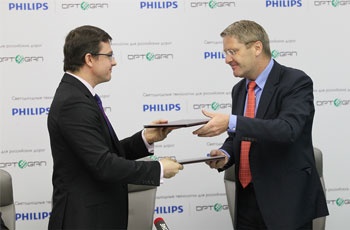 Philips is set to enter the market for high-efficiency road lighting in Russia, Kazakhstan and Belarus, thanks to a new joint venture set up with rival LED and lamp manufacturer Optogan.

The new company will be majority-owned by Philips, which will own 51% of shares, with St Petersburg-based Optogan owning the remaining 49%.

According to the two firms, the market for road lighting in Russia is about to take off, thanks to the government’s programs aimed at modernizing road infrastructure with energy-efficient technologies. As a result, they expect the market to double over the next four years, to €100 million.

Because of the focus on energy efficiency, around half of that market will relate to LED-based road lights specifically, they add. Both Optogan and Philips, the latter through its Lumileds subsidiary, have expertise in fabricating the kind of high-brightness LED chips needed for the high-efficiency road lights.

Customs union
In a statement announcing the new venture, Philips’ CEO for Russia Arjan de Jongste described the development as “the beginning of a new, ambitious journey to become a key player in the Russian outdoor lighting market”.

Optogan’s CEO Maxim Odnoblyudov added: “Optogan has a very deep understanding of the local Russian market. By joining forces with Philips we will be able to serve Russian customers even better.” Products manufactured by the joint venture will also be sold in Kazakhstan and Belarus, thanks to Russia’s customs union with its neighbors.

Road lighting has long been seen as a likely early market for solid-state lighting to penetrate - partly because of the better efficiency offered by the technology over high-pressure sodium lamps, but also thanks to the expectation of large savings in maintenance costs.

Because of the much longer lifetime of LED-based lamps, they should only need to be replaced very occasionally. Where that is a relatively minor consideration in domestic applications, replacing road lights requires expensive and disruptive specialist maintenance, so expiring lamps add significantly to the lifetime cost of these installations. Aside from the energy consumption and lifetime advantages, LED-based road lighting is also expected to improve visibility for drivers.

Major projects to install LED-based road lighting have already been completed or are under way in high-profile locations such as Shanghai, China, and in Los Angeles. Tunnel lighting also looks to be a good application for the technology, because these lights are continually “on” and maintenance is highly disruptive. 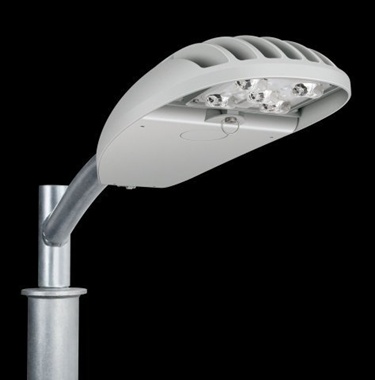 • Meanwhile rival US-based LED maker Cree, which now has very strong expertise in road and street lighting thanks to its acquisition of Ruud Lighting last year, is about to release new products that it claims are 50 per cent more efficient than conventional high-pressure sodium street lights.

The “XSP Series” of street lights, available starting next month, are also said to offer double the lumens per dollar of previous generations of the technology, thanks to a combination of improved chips and optical innovation.

“Breakthrough engineering improves optical efficiency 15 per cent compared to previous generations of LED street lights and reduces the number of LEDs used by more than half without sacrificing application performance,” claims Cree. Fewer LEDs enable lower luminaire costs and faster payback for municipalities, it adds, while the company’s “NanoOptic” optical technology is said to deliver light to the street more efficiently.

Cree also says that the new street lights have a system efficiency of 100 lumens per watt, and a claimed lifetime of 100,000 hours – meaning that they should last three times as long as equivalent sodium lamps.

“Cree XSP Series is a giant leap forward in outdoor lighting and is made possible by innovation in every aspect of the product,” said Christopher Ruud, VP and general manager at Cree lighting and the son of Alan, founder of Ruud Lighting. “Capitalizing on innovations in Cree LED chips and components, optic technology and design, and overall luminaire design, the XSP Series exemplifies the best of Cree integrated technology. The result is the best alternative to traditional street lighting with better payback, better performance, and better pricing, allowing municipalities to focus their resources where it matters most.”