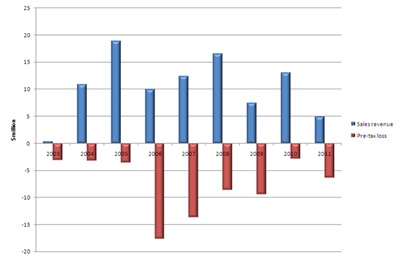 In its fiscal 2011 financial results, the Tucson, Arizona, firm, which was known as Ionatron until 2008, posted annual revenues of only $5 million – down from $13 million in 2010, and the lowest on record since its emergence in 2003.

The sharp drop in sales resulted in a net loss of $6.5 million for the year, worse than the $3.2 million in 2010, and with “cash and equivalent” assets of only $3.9 million on its balance sheet, new finance will be required soon:

“Our continuance in business beyond 2012 is dependent on successful development of new commercial customers and sales of our ultra short pulse (USP) laser systems, obtaining profitable operations and additional financing necessary to fund our operations,” read the company’s statement accompanying the latest results.

Having already cut the company’s workforce in a bid to make ends meet, Applied Energetics’ own directors are now taking a personal 25% pay cut, on top of a 15% reduction agreed last July. As a result of that initial cut, company president Joe Hayden had seen his base salary drop to $195,000, while those of COO Eric Lau and CFO Humberto Astorga had dropped to $150,000.

Commercial focus
The change in strategy will see the firm drop its internal investment on developing counter-IED, high-voltage and laser-guided energy technologies, to work instead on advancing its solid-state Yb:YAG USP lasers for commercial applications.

Applied Energetics exhibited its new “Wild Cat” lasers earlier this year when it attended the Photonics West trade show for the first time. Emitting at 1031 nm, the lasers feature up to 100 W average power at a repetition rate of 30 MHz, and a pulse width that is adjustable between 800 fs and 10 ps.

“We believe our proprietary USP laser systems have the potential to offer better performance for high pulse energy and high average power, compared to commercially available USP lasers for micromachining,” Hayden added. “Our focus will be primarily on advancing our solid-state USP lasers for commercial applications.”

The company has set up a laser application center to let potential customers or strategic partners use or trial the technology, as well as a co-operative agreement with contract manufacturer Laser Light Technologies to jointly develop processes for micromachining applications.

According to filings with the US Securities & Exchange Commission (SEC), in its previous guise as Ionatron the company attracted equity funding of $8 million in November 2005, and $26.5 million in April 2006.

But the company has also made losses consistently over the past decade (see figure), and with fiscal year 2011 delivering the lowest level of revenues since 2003 it appears that Applied Energetics is now considering all available options. Those include: “strategic alternatives, including mergers, the acquisition of one or more businesses or technologies, and/or the disposition of one of more of its existing businesses”.