First Solar topped Lux Research’s rankings with just over 2 GW produced in 2011, but will come under pressure in 2012. 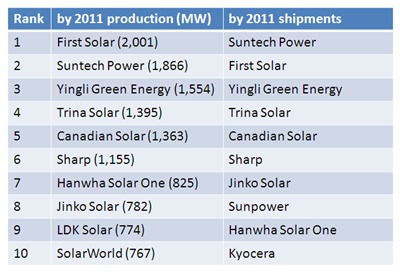 A new report from analysts at the cleantech consultancy Lux Research says that thin-film CdTe photovoltaics specialist First Solar led the world in terms of PV modules produced in 2011.

The US firm made modules capable of providing just over 2 GW in solar-generated electrical power last year, equivalent to 7% of global production and just enough to keep it ahead of rival Suntech Power, whose 1.87 GW put the China-headquartered company into a clear second place.

The Lux analysis, compiled by lead researcher Fatima Toor, contrasts slightly with last month’s market breakdown by IMS Research, which ranked the PV module makers by shipments rather than production.

IMS analyst Sam Wilkinson said Suntech topped the shipment rankings for a second time as it became the first supplier to ship more than 2 GW of modules in a calendar year, and beat First Solar into second place.

Overall though, the two analyses demonstrate the extent to which the leading Chinese suppliers have been able to apply pressure to their rivals in the West. Also appearing in Lux’s top-ten list of producers last year are Yingli Green Energy (1.55 GW), Trina Solar (1.4 GW), Jinko Solar (782 MW) and LDK Solar (774 MW). Of those five, only LDK failed to make the IMS top-ten.

Module burn-off
Fatima Toor’s report says that crystalline silicon modules – which is what all of those Chinese companies produce – continue to be priced at record lows, with Tier 1 manufacturers selling at around $0.9/W. Lower-ranking competitors seeking to burn off excess module inventories are selling at even lower prices, as they attempt to grab some market share and survive the ongoing market shake-out.

Commenting on the cut-throat conditions in the market to investors last week, Suntech’s CEO Zhengrong Shi said that some of those lower-ranking competitors in China were not even producing any modules because of the ongoing supply glut. Shi believes that the inevitable consolidation that results will help to hold up prices later in 2012, but Suntech is prioritizing cost-cuts for 2012 after posting a huge financial loss in 2011.

The collapse in module prices has already prompted an anti-dumping trade complaint in the US led by SolarWorld, and the initial findings of a Department of Commerce investigation into alleged Chinese government intervention to skew prices will be made early next week.

Suntech’s Shi also said last week that there was “a possibility” that the European Union would follow the US with the filing of an anti-dumping case. If SolarWorld, which is headquartered in Germany, wins that initial determination in the US then similar action in Europe would appear to be much more likely.

SolarWorld was ranked in tenth place by the Lux analysis of 2011 production levels, manufacturing 767 MW of modules last year to be the only European company in the top ten.

Fukushima effect
Looking ahead, Lux’s Fatima Toor predicts that it will be Japanese and Korean module manufacturers who perform well in 2012, after Sharp and Hanwha Solar One appeared in its top ten with 1.16 GW and 825 MW of production last year respectively.

“Expect to see a major rise in market share from Japanese and Korean suppliers, while European module manufacturers struggle with financial woes and reduced government incentives for solar in Europe,” Toor noted, adding that the increase in PV interest in Japan following the Fukushima nuclear incident a year ago had spread to nearby Korea.

The Lux report also highlights the progress being made by Japan-based Solar Frontier, which produces modules based on thin-film copper indium selenide and now ranks among the top-25 producers globally.

But the market remains dominated by the big players; according to Lux the ten leading manufacturers together accounted for 12.5 GW, or 44% of the total 28.4 GW global PV module production.

Despite its leading position, the market conditions have prompted a major strategic change at First Solar. With government subsidies disappearing from Western markets, its long-term strategy is to become the first PV company to penetrate unsubsidized electricity markets, by reducing costs and significantly increasing PV module efficiency.