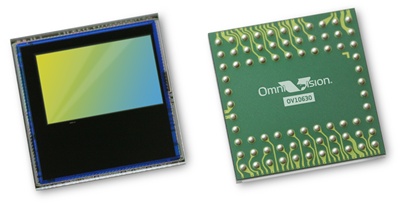 Omnivision, the California-based developer of image sensors based on silicon CMOS technology, has reported a sharp fall in revenues for its third quarter of fiscal 2012, which ended on January 31.

But despite a 30% year-on-year decline in sales to $185.2 million, the company’s share price bounced 10% in early trading following the announcement, after executives said that sales in the current quarter would jump to between $195 million and $215 million – higher than analysts had expected.

The Q3 figure also represented a smaller-than-expected decline in revenues, which were down only 15% sequentially and above the high end of Omnivision’s prior guidance for the period.

While the smart phone market, which has been the single largest driver for sales of high-end sensors in recent times, is now expected to be steady, it is the sector that Omnivision calls “entertainment” – and which includes tablet PC applications – where the company is anticipating a real surge of demand in the current quarter, said VP of worldwide sales Ray Cisneros.

In the quarter just completed, phone applications accounted for 52% of sales (down from 60% in the prior quarter), while “entertainment” applications were behind 28% of sales (up from 20%). That means that sales for phone applications have plummeted over the past year, and this part of the business was described by one analyst as “falling off a cliff”.

One problem is that the average selling price (ASP) of Omnivision’s sensors dropped markedly in the latest quarter, to $1.29 (from $1.42 in the prior quarter), while unit sales dropped to 143 million from 153 million sequentially. Last year, Omnivision was reported to have lost its spot as a sole-source supplier for the Apple iPhone 4S, after a tear-down of the handset by Chipworks found a sensor made by Sony in the key slot.

Nevertheless, Omnivision remains a dominant player in the CMOS market as far as consumer applications are concerned, with an estimated share in excess of 50% for both notebook PC webcams and security applications. Its share in smart phones has been put at around one-third by analysts.

In the automotive market, where Omnivision’s market share is somewhat lower, at around one-quarter, the company has just released to mass production two new products intended for the growing number of driver-assist camera applications.

The OV10630 and the OV10635, described as the company’s flagship automotive image sensors, have both received AEC-Q100 Grade 2 performance qualifications, and are set to ship to customers.

Both sensors use Omnivision’s split-pixel technology, in which the information for the high dynamic range multi-capture is sampled simultaneously from the scene rather than sequentially. This is said to minimize motion artifacts, yielding superior image quality in the most demanding automotive dynamic scene conditions.